So here is another loaf of bread from my experiments using a two-layer vented pan during baking. Unlike the first time (when I accidentally discovered the possibilities of this pan), I was able 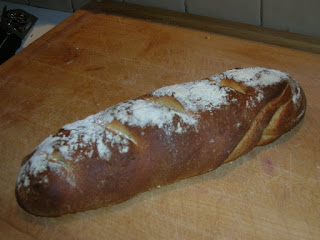 to make a much more attractive loaf of bread by focusing on the steps that make the process succeed.

The one major downside of my first loaf of bread was that the constant flow of hot steam made the bottom tacky and damp. To remedy this I only put in 1/3 C of water in the lower pan. That seemed like a reasonable amount of water to help the dough rise, but small enough to evaporate early in the baking process. After 20 minutes at 400 F I checked on the bread and found the pan had evaporated and the crust was a light graham cracker brown. The bottom was slightly damp, but not as bad as the first time. I removed the pan and set the bread right on the oven rack and allowed it to bake for another 10 minutes, when it took on the darker color you see here. 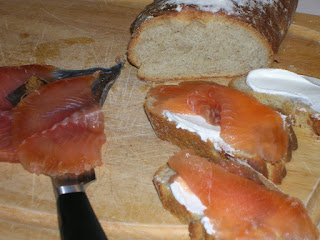 After cooling for a little over an hour, the bread was ready for slicing! It didn't rise as dramatically as the first time, as this was a much drier dough to start with, but I preemptively made four slashes across the top of the bread to allow it to open up and naturally expand. It was still light and chewy, with a small amount of backing flavor from the 1/2 C of sourdough mother I added. With a topping of mascarpone and home-cured gravlax, it's pretty hard to beat!
SHARE SHARE SHARE