While in NYC, Carla and I stopped by Murray's Cheese shop to fill up on a rather reckless amount of dairy products. We tried several cheeses and purchased four others. I'll write about the cheeses in another post (including the new seasonal cheese from Jasper Hill Cellars), but I'm especially excited to talk about getting to eat Nduja. 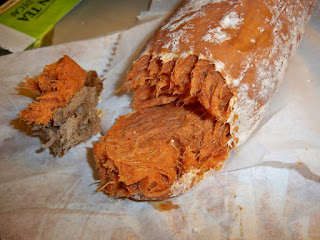 Chris Cosentino is a San Francisco chef who inspires me to cook more offal and puts the offal dishes I do cook to shame. He has made chocolate-coated cock's combs, a pig's bladder stuffed with a blood porridge, and a terrine out of beef lips. He's also a partner in a (relatively) new salumeria, called Boccalone. One of their specialties is a Calabrian salami called Nduja (en-doo-ja). I've only seen this product one other place, and that was selling it as a spread in a glass jar.

Spread? Yup, a spreadable salami. When you cut open the pork casing you find a mash of finely ground pork that's been ground into a burnt orange paste. The coloring comes from the generous amount of red chilies added to the pork, which is traditional for many dishes that originated in heat-loving Calabrian kitchens. As you spoon out the creamy insides, it almost feels like your squishy a big, porky tube of toothpaste (which is nowhere near as appetizing as this salami deserves). 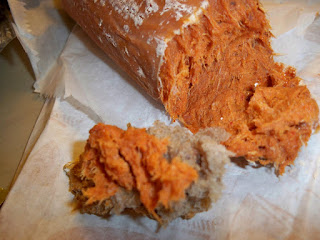 The taste is like eating a good, spicy slice of Calabrese sopressata. The heat slowly builds on your, but never becomes overpowering or detracts from the smooth, rich flavor of the pork. Carla enjoyed the Nduja, too, as it didn't have the large spots of fat that most coarse-ground salami features. The texture is like eating incredibly delicious pork rillettes, except in salami format.

And that's an important thing to remember: this is a cured salami - not ground pork that has been cooked. Chris isn't tell exactly how he makes his version, but I read that they let the ground pork ferment outside of a casing, then fill the casings and let the Nduja finish it's aging inside the casing. This two-stage curing process *supposedly* ensures that the finished product is still smooth and creamy, but who knows for sure. All I can think about is the regret that I only bought one, rather than two.
SHARE SHARE SHARE