While I was particularly enthralled at a chance to try the Nduja salami at Murray's, it's important to remember why I originally went there; the cheese. We sampled several cheeses, including the luscious washed-rind triple creme Red Hawk 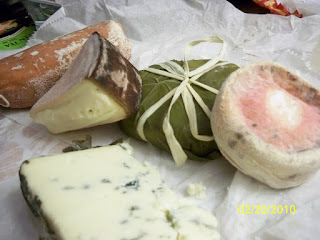 from Cow Girl Creamery, but what follows are just the cheeses I purchased.

The first cheese I knew I was leaving with is Rogue River Blue by Rogue Creamery. Rogue makes several amazing blues, but this is their piece de resistance! They make this blue once a year, basing it off their classic Oregon Blue recipe, but only made with raw milk from the cows on summer pastures. What makes it exceptional is all the care and affinage that goes into it. The wheels of cheese are wrapped in hand-picked syrah grape leaves from a neighboring Oregon vineyard. But before leaf-meets-cheese, the leaves are soaked in an Oregon pear brandy. It's definitely a sweeter blue, but the blueing is very thorough and prominent. Don't mistake "sweet" for "mild." It reminds me a lot of the Dutch cheese Fourme au Sauternes, which is a Fourme d'Ambert washed in Sauternes ($$).

Next, I was happily surprised to see a wheel of Swiss Forsterkase only a few cheeses down from the Rogue. 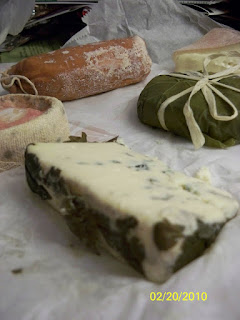 Forsterkase gets its "woodsy" name from the strip of pine encircling the wheel. This is a washed-rind cheese, with a sticky, tacky texture to the paste of the cheese. I'll be honest, this one was just ok. It was surprisingly mild, despite the thick, washed-rind skin and woodsy banding. Carla described it as tasting like "really good Brie," which is an accurate, if not backhanded, compliment.

Since then, I reached out to Caroline Hostettler at Quality Cheese/55 Degrees, who is the direct importer of some of Switzerland's best cheeses. She sent me some information on Forsterkase, explaining that there has been some legal grappling over the name, when two cheesemakers split ways. The Forsterkase made today is rather timid, but Caroline stills sells the real deal under a new name. Also, for the record, Caroline is an absolute gem. Most people I've spoken to in the cheese world have been very friendly and helpful, but she really goes above and beyond when it comes to educating the world about real cheese.

For our next cheese, Carla asked the clerk at Murray's for a recommendation. After some deliberation, he poked a small disc called Amanteigado toward us. Made of raw sheep's milk and secured with a small bandage-wrapper, this was the surprise star of the evening. At room temperature I could feel the liquid innards of the cheese sloshing around underneath the thin, leathery rind. Akin to a Serra da Estrella or Torta del Caesar, Amanteigado is a Portuguese treasure I'm excited to relish again soon. It had only a slightly sheepy-gaminess, despite being so ripe. The paste of the cheese was slightly salty, with a lingering finish of herbs and olive oil. This cheese was too good for bread, so we scooped it out with our fingers. 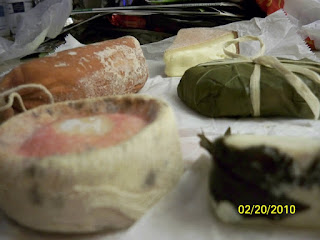 As my budget was nearly shot, I chose one last cheese to complete the evening. As I scanned the vast pile of cheeses heaped up on the counter, something new caught my eye. I thought I was familiar with all of Jasper Hill's cheeses, but Murray's had a new one called Caspian. Similar to the French cheese Banon, Caspian is a small disc of fresh cheese wrapped in grape leaves. Unlike Banon, which is goat's milk wrapped in eau de vie soaked leaves, Caspian is a pasteurized cow's milk cheese wrapped in leaves soaked in a Vermont Icewine.

At first, I was a bit surprised Caspian was a pasteurized cheese, coming from the raw-milk friendly Jasper Hill, but after tasting it all doubts were pushed aside. This Caspian was pretty young, with just a thin skin on the cheese underneath the leaves. Slightly fruity, Caspian has a creamy body with a slightly tart (and just barely funky) finish. It was a nice mid-point between the cellar-funk-dense washed-rind cheeses of winter and the fresh cheeses of spring.