While Carla and I were in the Outer Banks we found wild, sushi-grade tuna for only $10.99/lb. So I got 1.5 lbs, with a pound to cure and a half pound for us to eat for supper. The last fish I 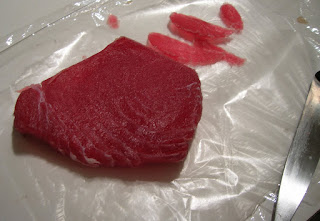 cured was trout, which came out a bit dense from sitting in the cure for 3 days when it only needed two. With tuna being such a thick, dense fish, I expected it would take at least three and possibly four days.

Three days later, I think it only needed two. It's not as salty as the trout, but still has an overly firm texture and dense bite. Salmon is usually quite silken after 2-3 days, which surprises me as their fillets are not as thick as tuna. Part of me thinks it's because of the concentric rings of meat that make up a tuna loin. If you've ever overcooked tuna, you know how these rings shrink into themselves and separate off like layers of an onion. I wonder if the salt/sugar cure penetrated through the thin membranes that separate each ring of meat. The cure would then quickly absorb through these dividing rings, resulting in the speedy cure. 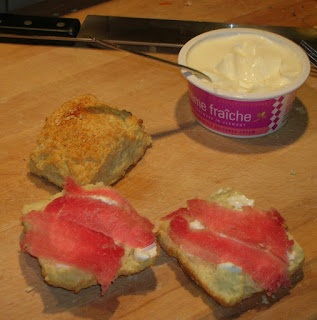 All that aside, it's still quite tasty! A bit sweeter than the trout, with a rather mild flavor and no "fishy" aftertaste. And I love the insane garnet color of the meat! It was a grapefruit-pink to start, then took on these deeper shade after the first day in the cure. It's a pleasure to look at, and to eat. A few ruby-red slices on a biscuit still hot from the oven (along with a dab of creme fraiche) and you'll feel like a southern colonel!
SHARE SHARE SHARE