I was eating duck leg confit last week when I had a revelation. The dense, lobe-like texture of a confit-ted duck leg drummet is very similar to the texture of a braised lamb shank. They're both comprised of lots of long, narrow, hard working muscles roped together with tendons and 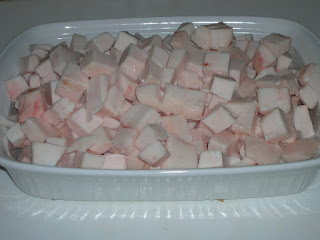 silverskin. So shouldn't a lamb shank take to confit preservation just like a duck leg?

To confit is to preserve by cooking in fat, then storing in said layer of fat. Unlike other fat-cooking methods (like deep frying) you need a fat that is solid at room temperature, like duck or pork fat. The fat seeps into every nook and cranny of the meat and smushes out any unwanted, bacteria-harboring oxygen. Since you cook the meat slowly over several hours, the fat and the meat reaches extremely high temperatures. It's like the slow version of sealing homemade pickles in a boiling water bath. The high temperatures force out the oxygen and ba 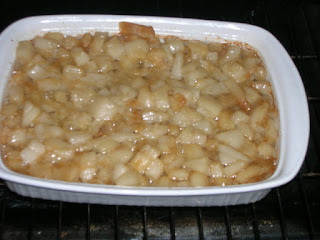 sically pasteurize the foodstuffs. But the great thing about confit is that the meat deepens in flavor, like a stew mellowing a day or two after cooking.

So first thing I need is fat. Lamb fat can have a bit of a gamey 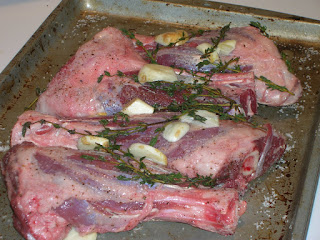 taste, which I don't mind, but I've never seen it for sale in quantity. But I did have six feet of back fat rolled up in the freezer. So I sliced it into 3/4" cubes and put it in a large casserole dish. It slowly rendered into lard over the course of 4 hours in the oven at 325 F. Then I poured it through a china cap (to strain out the crispy little bits) and popped it into the fridge. While this was happening, I prepped my lamb shanks. Unlike duck legs, lamb shanks have a good amount of silverskin. I worried this would impair the fat penetration, so I used a pairing knife to gently cut most of the visible silver skin out. Then I tossed them generously with salt and pepper. Some thyme and garlic finished off the flavorings. Now they'll rest overnight with the fat until tomorrow's confit-fest!
SHARE SHARE SHARE