These are some pretty unique peanuts I bought off nutsonline.com. They're wild peanuts grown in the jungles of the Amazon and harvested by local 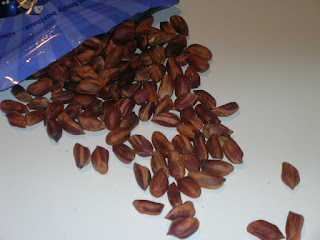 tribes. In reading about these peanuts, it seems American peanuts need to be resown every year, but many South American varieties are perennials. Even with regular harvests, the peanut plant still maintains it's root system. So it's normal to take a walk in the jungle and find them popping up like ferns. I was also surprised to learn that the peanut is indigenous to Argentina, Paraguay and Bolivia. Not Africa, as I was previously told.

Taste-wise, these peanuts are really "grassy." By grassy, I mean they taste like grass. I've seen the description "vegetal" defined as "tasting like green bell pepper." These nuts don't taste like a bell pepper. They taste like you're drinking wheat grass. Which isn't a bad thing. It's actually a pretty cool thing. Once you scrape off their beautiful burnished red calypso skin, they look like a malformed, bone-white peanut. I was a little worried they would just taste like regular peanuts, but it's so amazing they have such a unique taste! I feel like there's a vague "American peanut" flavor to them, but just barely. 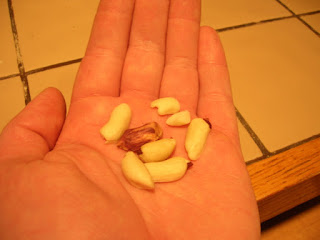 Plus, they shouldn't affect your peanut allergy. Nutsonline says "Unlike the hybridized peanuts so many people are allergic to, Jungle Peanuts are 100% free of aflatoxin (tested regularly). They are loaded with 40% heart healthy oleic acid and 26% protein (including amino acids like methionine)." They also contain arachidonic acid, a good fatty acid that is normally found only in meat