I decided to take a break from my usual gravlax and cure some trout instead of salmon. The process was the same as curing salmon; one cup salt, half cup sugar mixed together. Half goes 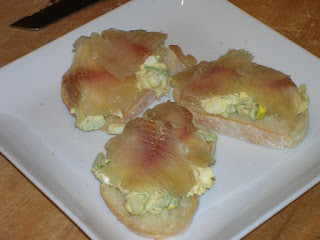 under the fish, half goes over the fish. Cover in plastic wrap, put in the fridge, weigh fish down with 28 oz can of tomatoes to help expel water from the core. Turn daily for about three days until the middle feels firm and not squooshy.

What makes cured fish endless exciting is both the quality of the fish and the flavorings added. For salmon I go with dill (70% of the time), or fennel fronds (20%), or grated horseradish (10%). The other 10% is spent dreaming about curing fish and forgetting my poor math skills.

For my first go, the trout came out very tasty! Being so much thinner than salmon I should have thought to remove it after two days, but this slipped my mind. So it was a bit harder than it should have been, with a tighter, slightly saltier texture and taste. That being said, the trout was milder than salmon, with a slight oakiness that didn't seem to reveal it's source. I found the easiest way to accommodate the drier texture was to serve it on baguettes topped with a mustard-y egg salad. The salad added moisture and became a nice canvas for distributing that extra hit of salt.