As I continue to work my way through the grab-bag of offal Carla got me from our co-op's pig farm, I 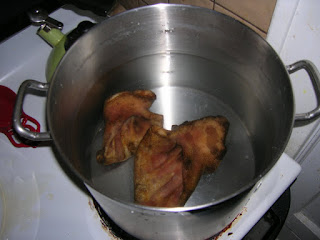 decided to enrich a healthy kale soup with the salty crunch of some fried pig's ears. The pig ears received the same basic prep as the tail. I burned the excess hair off using my grill, then gave them a thorough scrubbing in cold water. Then I placed them in a large pot of cold water and slowly brought it to a simmer.

Once the water was simmering, I lifted the tails out and discarded the water. This helps to eliminate the floating scum of coagulated protein that collects during poaching. Then the little ears got a proper poaching with onions, carrots, celery, garlic, and bay. 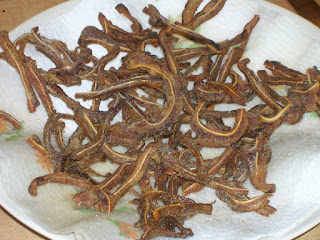 Unlike the tails, which were a blend of meat, fat, and skin, the ears are just skin with a tell-tale white band of cartilage running through the middle. No matter how long you cook it, the cartilage never loses its firm bite. This gives the ear a slightly gristly texture, but certainly no reason to avoid eating one.

Once patted dry, the ears are quite fragile and the skin tears easily. It's 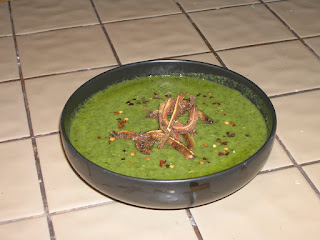 best to let them set up overnight, when the natural gelatin will help firm them up again. The next day, I sliced them thinly into strips and fried them at 375 F for about 2-3 min per batch. As soon as they came out of the oil, I greeted them with an enthusiastic dusting of sea salt.

And that's all there is to it! I promised a coworker (who had never tried a pig's ear before) to bring them in to work, and a few people enjoyed them unadorned. They're just delicious, salty snacking! I even got my boss' two year old to eat one. He was very pleased, calling it a "french fry." I hope his vegetarian mother is proud of him expanding his gastronomic horizons! The rest of the pig's ears ended up as porky croutons on my kale soup. They added a nice, salty contrast to the smooth, herbal soup.
SHARE SHARE SHARE