If asparagus, rhubarb, and fiddlehead ferns are the vegetable world's bellwether's of spring, then gleaming sacks of fresh shad roe would be their 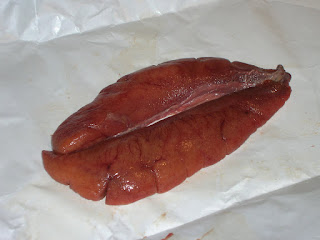 ichthyological equivalents. Although more of a New England regional delicacy, you can still find fresh shad roe here in Pennsylvanian markets. I've only ever seen it wild, which is another nice benefit of the fish.

The actual roe looks like a spleen that's been cut into a oval. If you're not in the habit of eating a lot of spleen, shad roe looks like a bright, blood red oval with slight, soft fringes at the edges. It's actually two egg sacs together, which need to be separated before cooking. In your hands, the shad roe is soft and slightly smushy, like what I imagine the inside of an earlobe would feel like. 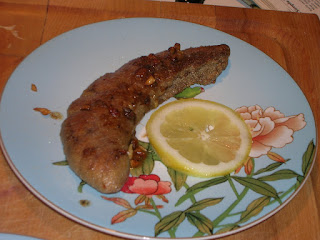 While cutting the two sacs apart I accidentally nicked a corner, letting about a dozen little eggs seep out.

The eggs are smaller than a pin head. More like a pin tip. Following tradition, I lightly salted and floured the roe before sauteing them in melted butter. Oddly enough, the roe loses its vibrant color and turns a light brownish-gray once cooked. They cook through in just a few minutes, at which point you need to get them quickly out of the pan. The smaller roe sac decided it had spent more than enough time in the pan and actually burst at the end like an overstuffed hotdog. As hundreds of little shad eggs, cloaked in sizzling butter, splashed out of the hot pan and onto my sweater, I could see why this was a nice spring tradition and not something you'd fry up while shirtless on the beach. 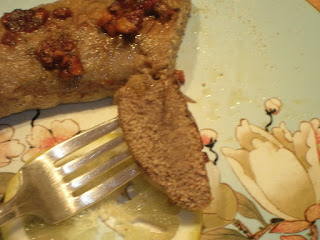 Taste-wise, the eggs were extremely mild and creamy. I expected them to have a vague fishiness to them, but none was to be found. I wonder if this is because the shad are caught when they move from the ocean to freshwater streams to breed. The clean, moving water might help remove the heaviness of the sea flavor from the eggs and flesh. Although it sounds a little far-fetched, I've read recipes that instruct you to store live eels in a ice chest full of fresh water for 24 hours to help remove their muddy, bottom-dwelling flavor. The same principle might apply.

The flavor almost reminded me of the mild taste of veal. Carla and I both thought it might be nice to try cloaking them in grated Parmigiano Reggiano, rather than flour next time. The slight nutty flavor of the shad roe might find a happy partner in that of the cheese. And at $11.99 per pair of egg sacs (weighing in at just over a half-pound) this was a caviar we could actually afford.
SHARE SHARE SHARE