Pork Loin with Prunes and Chiles

While I'm sure you're expecting me to recap the new opening season of House, I'd like to take a moment to sing the praises of prunes and chilies. I saw this recipe in an article on Mexican cooking, which surprised to have prunes as a dominant ingredient, not considering them to be a "Mexican" flavor (I guess Mexican-fusion is more apt). The chef made a sauce for roasted pork by blending dried chilies with prunes, thus 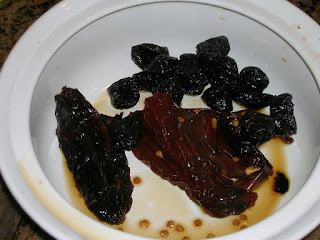 getting a very intensely flavored sweet/heat to match mild white pork. This also resonated with me because it came on the heels of that Top Chef Masters episode where Rick Bayless made a sauce for lamb by blending dried mission figs with a red wine reduction. Clearly I need to jump on board, too.

I've done the classic roasted pork loin stuffed with dried fruit, from traditional prunes to a snappy blend of dried apricots and wheat beer. But it seems a lot less fussy to simply puree the dried fruit into an intensely flavor sauce for dipping or shellac-ing on pork. And it was simple as anything. I just soaked the chilies (modest De Arbol chilies in this case) in boiling water for 20 min while I seasoned the pork with a Cuban spice rub. Now, I always pour out the first batch of water from soaking dried chilies, as it's a bit musty or sour to me. Then I added 1/2 cup of dried 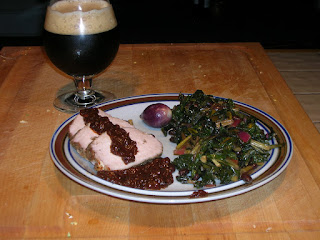 prunes and fresh boiling water to help plump them up. Fifteen seconds in a blender and this sauce was good to go!

I like a nice thick sauce (almost a paste), but you could thin it out with water or even wine if you wanted. The first thing you taste is the deep, sweet flavor of the prunes, followed by a slightly savory hint of heat from the chilies. The smokey notes of the pork intertwined with the earthiness of the chilies, just as a slight rise of heat finishes 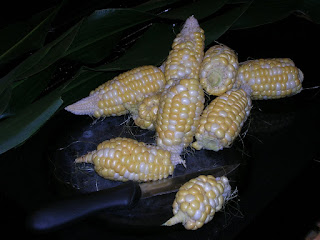 off each bite. Not too shabby for two ingredients, not counting water. On the side is the last of this summer's Swiss chard with black beans, balsamic, and fried garlic.

To complement, I raided my parents garden for all the misshapen ears of underdeveloped corn that sprouted too late in the season. While not the prettiest ears of the patch, they still had some mighty sweet kernels. Pureed to a pulp with an onion, some garlic, and a Thai chile, you'd never 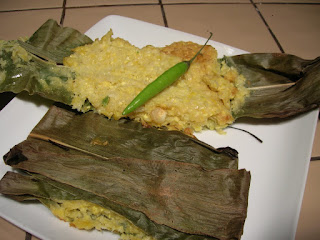 know these ears were the runts of the season. My goal was to make them into fresh tomales, but the corn husks were too small to adequately wrap the pureed corn into nice-sized patties. So I used a few of the corn stalk leaves to get adequate vegetable bundling. About 15 min on the grill was long enough to set the patties into something solid enough for plating. All-in-all, this was a delicious adios to summer.