Few things could make a work day better than coming home to a big box of salted pork. After having to unload a trailer of cheese at midnight the previous night, I was rewarded to find my La Quercia order had arrived! La Quercia finds the 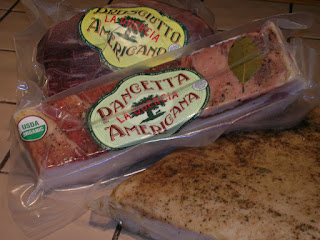 best pork they can and makes into the best prosciutto available on the market today. Now, when it comes to imported Italian prosciutto, I'll take San Daniele-style over Parma-style any day. But if the world was my dinner plate, I would say the best cured pork I've had--anywhere--is being made in Iowa.

What I like about La Quercia is that they're true to authenticity and tradition, but that doesn't hold them from making a better product. Take their Speck, for instance. Speck is like the Northern Italian version of prosciutto. So far north that the culinary boundary mixes freely with Austria. Normally Speck is salted, smoked, then cured to aged. But La Quercia found that the initial smoking made the meat too tight and dry to be properly cured, so they started smoking it after it was fully cured. This would just perfume the meat without sacrificing the silken texture. A small change, perhaps, but infinitely exciting if you get the jollies over the minutiae of curing meat.

So I ordered a pound each of their prosciutto, organic pancetta (fully cured so you can eat it raw), and lardo. Lardo is just what it sounds like: pork fat. You take a large flap of pork back fat and cure it, just like a leg turns into prosciutto, or a caterpillar into a butterfly. Traditionally, lardo was favored by quarry workers who would eat large slabs of lardo on bread to give them the energy to hack into travertine mines for 12 hours at a time. Today, hoity-toity foodies shave it onto crostini, over beans, or wrap various parts of quail or rabbit with it. La Quercia likes to refer to it as "Iowa White," in reference to the 1976 euphemism for heroin as "China White." Addictive? Possibly. Delicious? Oh yes! (Referring to lardo, not heroin, FYI)
SHARE SHARE SHARE

lol, I just read the title of this one. Dont know how I missed it the first time... It made me laugh out loud though.