Eric Ripert, chef of Le Bernardin-fame, once said something to the effect of "lavender should be kept in your sock drawer, not your food." In an era where celebrity chefs are propagating at a 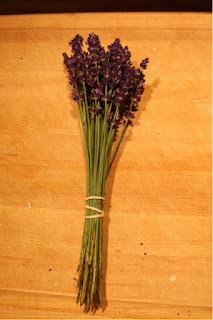 rate that makes Starbucks look like a mom and pop store, Ripert will stand as a shared culinary treasure for both the U.S. and France for many generations to come. When he speaks on food, chefs and novices alike should heed his advice. With this in mind, I do have to admit that I owe something of a personal culinary debt to lavender.

While in high school, I visited my brother Steve in college and we went out for dinner. For dessert, I ordered a lavender creme-brulee. Honestly, I don't think I had a choice to order anything else. The mere idea of including lavender into a dessert was akin to making patchouli custard. But when I cracked through the sugary crust, I was surprised to find a creamy, yellow center. It wasn't the purple I expected something titled "lavender" would inherently display. 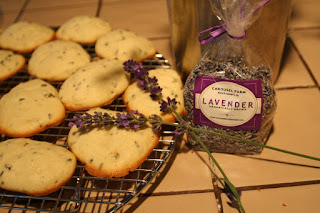 The first bite was perfect, floral heaven. Soft custard with just a billowing brush of lavender on the palate. Within that custard, I suddenly realized that you could flavor food with a whole wealth of ingredients beyond McCormick spice bottles.

All this came back to me when Carla and I visited a lavender farm this past Saturday. Yes, I didn't realize there were lavender farms, either. Once we arrived, it was like walking into a pastoral photos of Provencal France, where an weathered patriarch offers you an al fresco lunch of cold roast lamb, a dish of olives, and flageolet beans simmered in broth... Anyway, we were looking for some bundles of lavender to use for our wedding, but ended up picking up a sachet of dried lavender to play around with in the kitchen (along with a bag of chestnuts!).

First I made a lavender syrup, out of curiosity but also to help add some flavor to a modestly interesting Riesling. Then we decided on lavender cookies, which have been a true highlight of my lavender-culinary experimentation. Using a basic sugar cookie recipe, I blended in two tablespoons of lavender. It was just enough to add a light, heady fragrance to the batter, without pushing into the realm of overpoweringly aromatic. I thought about adding some chopped nuts, chocolate, or citron, but felt it was better for the lavender to stand alone. I think it paid off, as they're perfectly floral, sweet, and satisfylingly crumbly.