First Time with a Goat

Last weekend, along with visiting the Lavender Farm, Carla and I stopped at Dove Song Dairy, a dairy that specializes in raw goat's milk. Goat's 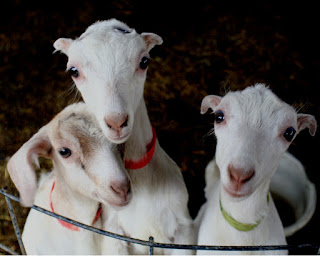 milk was the first type of cheese to really capture my imagination with how amazing cheese could be. From a sharp, crumbly French chabichou du poitou to a smooth, if not slightly earthy, Spanish garrotxa, I devoured any and all goat cheeses that fell into my claws.

When I began making cheese, I had planned to try some goat's milk styles early on, but learning the intricacies of a soft-ripened brie has been more of a learning curve than I expected. So finding a raw milk goat dairy was a real windfall--not only goat's milk, but unpasteurized! We 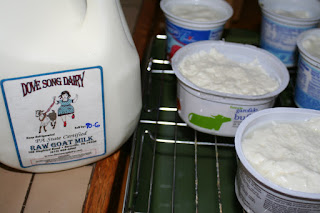 picked up three gallons of milk; one for brie, one for chevre, and one just to drink. Dove Song also sold raw-milk yogurt, which perplexed me as I thought it was illegal to sell raw milk yogurt. But they've found a rather clever loophole in the regulations. When you buy the yogurt, they ask you to sign a labor contract, where you "buy" milk and commission Dove Song to "make" that milk for you into yogurt, all the while signing off that you realize you're consuming raw milk.

So, it's three days later and the brie and chevre 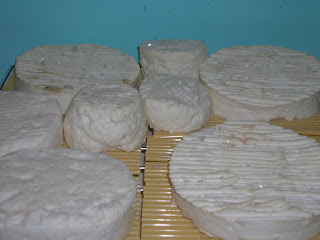 have drained off nicely. They've been salted and will now go into the cooler to develop their white mold rinds and bigger and bolder flavors. The people at Dove Song were great, along with producing very good milk and yogurt. It is a bit milder than I would like, though. I think this is from the breed of goats they raise, as some breeds are known for mild milk, while others are more assertive. There's a goat farm by Carla that produces pasteurized goat's milk, but it has the full flavor I'm looking for. So I'm thinking for my next batch, I'll try a pasteurized milk.
SHARE SHARE SHARE

I would be very curious to see the list of google searches that lead people to finding the title of this particular post. The cheese sounds good, though!