Lair of the Dogfish

Last week Carla and I made a slight detour to visit the Dogfish Brewery in Delaware, along with their original micro-brewery/restaurant. The 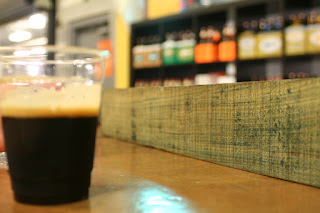 main brewery was an amazing site. There was a wonderful mash-up of modern brewing science and home brewing do-it-yourself resourcefulness. The best example of this was probably in the distillery, where they had made their still out of an inverted farm silo's grain dispenser cone. They also dropped the amazing (and slightly frightening) fact that their World Wide Stout (18% alcohol by volume) clocks in at over 600 calories per 12 oz bottle. 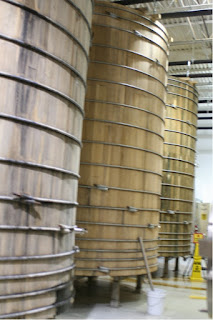 Of all their beers, I've been most impressed with their Palo Santo Marron, even before getting to taste it. The New Yorker had a fascinating write-up on how hard it was to import this "holy wood" from South America. The beer itself is simply stunning to drink, but it was just as amazing to see their giant wooden Palo Santo tank in person. They even had a block of the wood at the bar for people to smell and lift. Although that's probably not the first two things you'd want to do with a 2x4 you found on a bar, the Palo Santo wood was distinctly aromatic on it's own. It's also has a nearly unmatched density among trees, something clear as soon as you struggle to lift what should weigh 3-4 lbs and find it's more like 20 lbs. In the second picture, the Palo Santo tank is the one towards the back with the slight greenish-color.

The distillery was also interesting. It was just a converted room/hallway that had the still on one end and the five gallon aging tanks on the other. As simple as the workshop was, you could 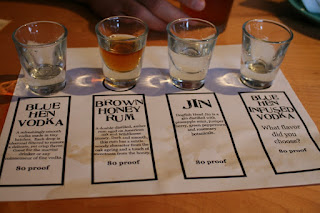 imagine that at one point the entire brewery was just like this. The spirits were also great, often using unique flavors or ingredients to make them stand apart from traditional brands. The rum used brown honey, while the gin included green peppercorns, pineapple mint, and rosemary. The spirits were more nuanced than the usual full-force flavors I'd expect in a Dogfish beer, something I might attribute to the fact that this is a relatively new venture for them.
SHARE SHARE SHARE