So while we did not win any ribbons for our angel food cake at this year's fair, my home-brewed beer took home four ribbons! The fair offers three categories for beer: ale, lager, and "specialty brews." A specialty brew might be a cider, mead, or some mix of beer with other additives, fruits, or whatnot. So I entered four of my favorites: 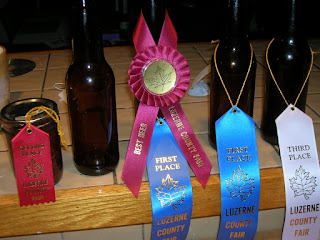 When I saw the ribbons, I mentally decided that the Rauchbier must have won and the Pineapple Porter didn't get any ribbons since it was an odd, tropical mish-mash of floral fruits and dark malt.

But the Rauchbier didn't even place! It was the only beer I submitted to not win anything. I was just so surprised by how well the balance of smoke and bitterness tasted that I was almost disappointed none of the other judges appreciated it. Even my mother said it was her favorite beer I've made to date!

The upside is that the Bolivian coffee stout (using my favorite coffee in the world) took first place in the specialty brews and the Pineapple coconut porter took third. The biggest surprise was that my Oaked IPA won first in the ale category, plus the Best in Show ribbon across all three categories! My Oaked IPA was a funny beer to make, as I originally wanted to combine the bitterness of a hoppy IPA with the depth from aging in oak. But I let the beer sit on the oak for too long and the oak came out as the dominant flavor. To reinstate the hops as a dominant force, I then dry-hopped the beer with Cascade and Fuggles hops in a third round of fermentation. I suppose that extra effort paid off!

Wow! How exciting! And to consider that each of your beers was actually competing against the other, very impressive!!!!

Congratulations. That is a great showing for your first year at the fair. You should enter the state competition.