I drive a good amount, normally making a two-hour one-way drive twice a week. So I've gotten pretty good at playing little thought games with myself to pass the time. One of these was the challenge to find common "restaurant" dishes that I (1.) haven't ever cooked or (2.) had not cooked in a long 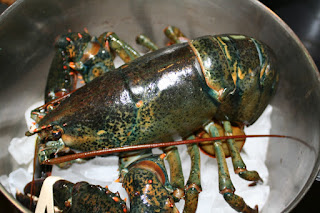 time. The first dish to come to mind was chicken cutlets, a dish I normally cooked at least once a week in college, but one that had fallen to the wayside. The second was lobster. Since the lobster offered more photo-ops, it got a blog post.

Originally I wanted two 2 lb lobsters, but all they had was 1 lb-ers and 3 lb lobsters. So I went for one three pound lobster. Following The French Laundry Cookbook's advice that lobster's are much easier to handle when par-boiled, I boiled the lobster (who we named "Oscar.") 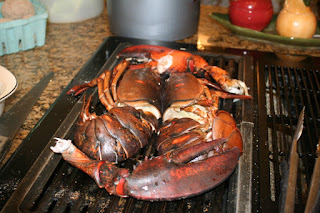 for ten minutes in two gallons of water at a rollicking boil. After that, I removed the claws and split the body cavity down the center. To help the claws finish cooking through, I cracked them slightly to help the heat from the grill to permeate them.

As Oscar got friendly with the grill top, I prepared an aioli for dipping the lobster meat. An aioli is basically a mayonnaise with raw garlic, which adds a bit of heat and zest to the creaminess of the mayo. To make the aioli, I put 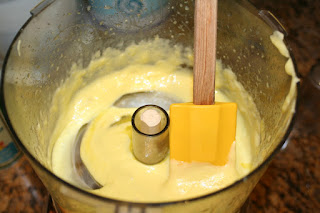 two egg yolks into a food processor with one garlic clove and the juice of a half-lemon. As the food processor spun, I slowly dribbled in olive oil until it formed the lovely emulsion we call mayonnaise. A dash of salt finished it off.

To compliment the richness of both the lobster and the aioli, my Mom and I made a panzanella salad. Carla called it 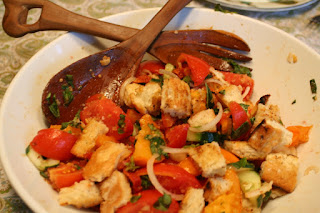 "bruschetta salad," which is pretty spot-on. We grilled bread and tossed it with fresh tomatoes from the garden, diced onion, basil, sun-dried tomatoes olive oil, and red wine vinegar. Wonderfully fresh and summery, the tomatoes threw off lots of sun-ripened juices that the grilled bread was more than happy to soak up. 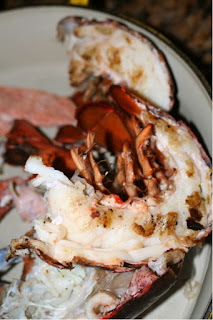 As a whole, this was a lot of fun to cook and to eat. Big chunks of lobster, swirled in aioli, matched the fresh, juicy salad perfectly. Together they kept the meal from feeling heavy or overly rich. As for cooking a lobster, it seems like most of the trick is just controlling the cooking to keep the lobster from turning rubbery or overcooked. But the French Laundry had a good point that the quicker you can get the meat from the shell, the easier it will be to cook the meat to the perfect balance of doneness and tenderness. In the future, I'd like to try something that really shows off the flavor of the lobster...but I might just be searching for an excuse to buy another lobster.
SHARE SHARE SHARE

any excuse is a good excuse for lobster!!! YUM!