This past weekend, Carla and I went up to visit my folks and help do some canning. I brought up three of my cheeses to try as well. 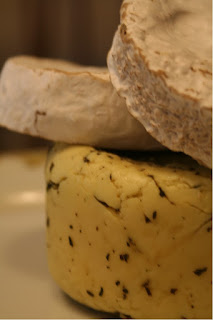 Included was a 90-day old basil Dry Jack, a six-week old raw milk brie, and a four-week old pasteurized brie using the new Flora danica cultures. The Dry Jack is based on a Monterrey Jack recipe, with a bit of inspiration from Vella's Select Dry Jack. Vella's Select is probably the most interesting Jack on the market. They take one of the mildest cheeses on the market, age it for 12 months and rub the rind with black pepper and cocoa. This transforms it into a truly spectacular cheese that earns the "artisan" moniker.

With that in mind, I repeatedly rubbed the rind of the cheese with olive oil and dried basil over the course of it's three months of aging. This also helped to remove any unwanted mold that grew on the surface of the cheese. When we cracked the cheese open, it was rather dry in texture, with a fruity olive oil flavor. The basil taste, 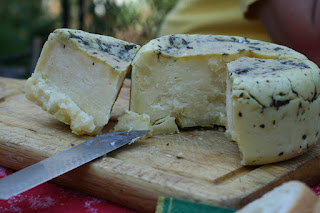 however, was virtually non-existent. This might be from the fact that I added the basil after the cheese had already developed a rind, leaving the basil to wither on the surface like so much unwanted mold. Another odd quirk of this cheese was its texture. While a bit dry, it also had a slightly "waxy" finish, to use the most unflattering word I can think of (but in ways the most accurate). 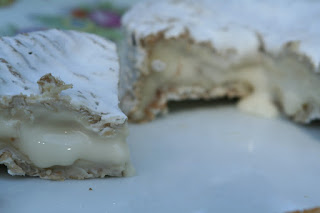 The raw milk brie (not pictured), although full-flavored had become much runnier in consistency since the last time I had tried it. It was still rather salty, masking some of the more nuanced flavors of the raw milk.

To finish on a positive note, the pasteurized brie using Flora danica really surprised and delighted everyone. Along with having a beautifully developed rind (with what looks like a few dabs of Geotrichium Candidium patches on it), the cheese was irresistibly gooey. Even slightly cool, the paste of the cheese still ran out with abandon. I had also been much more cautious in the salting of this cheese, which allowed more of the flavors of the milk to shine through. I can't wait to try the raw milk Brie I cultured with Flora Danica in a few more weeks!
SHARE SHARE SHARE