I find it fascinating that so many delicious foods started as "survival food," meant to sustain a community through seasons of drought or snow. As survival turned to commodity, salted pork became the $21.99/lb Prosciutto di San Daniele, while fermented milk became little tubs of fancily flavored yogurt. Today we can take these staples of harder times and find ways to make them seem luxurious. While most cheeses we know are centuries old ( 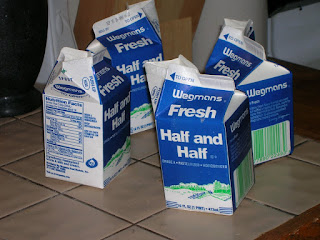 French Cantal, for example, which has been filling bellies since before the first century), a new style based on this idea of luxury and opulence appeared in the 20th century that was named triple cremes in the 1970's.

As you might guess, these cheeses are redolent of silken cream. Imagine a brie that has a fat content (75%+) just below butter's (80%+). You can achieve this richness in a number of ways. St. Andre has heavy cream whipped into the curds. Delice de Argental blends creme fraiche with the curds. Basically you're just larding the curds with extra butterfat.

But here's the problem for the home cheese maker: finding usable heavy cream. You cannot make a quality cheese with ultra-pasteurized milk. The high temperatures used in UHT pasteurization nukes the cheese and denatures all the proteins that are necessary for the curds. The bad news for me is that almost all heavy cream and half n' half is UHT, to extend their shelf-life because consumers don't readily consume cream like they do whole milk or skim. Finally I did find a Wegmans that sells small half-pints of "fresh" cream.

Since this was an experiment, I decided I would make this batch of Bries with pasteurized milk, 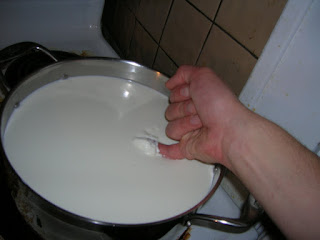 rather than the more costly raw milk (in case things go awry...). I replaced two pints of whole milk with the fresh half-and-half, accounting for about 25% of the volume. Although only a quarter of the milk, the half-and-half exponentially increased the butterfat content and made the milk set exceptionally quickly into thick curd that gave a clean break when prodded with a finger.

After letting the cheese drain overnight in their molds, I found they hadn't lost as much whey as a normal Brie. I believe this is because all the added fats and proteins from the cream is giving these Bries a stronger structure. Maybe. Maybe not. But the taste wonderfully rich! So while too early to call this a success, stage one of my forays into the triple creme kingdom are admittedly reassuring. Keep those fingers crossed!
SHARE SHARE SHARE

This is yet another example of why Culinary Pen is such an awesome blog. It makes you think! The notion of the transformation of "survival food" into commodity food, then into luxury food is fascinating. Do I see a culinary doctoral thesis emerging! What an amazing, thinking website.
TGD