While camping with my folks two weeks ago, I decided to taste-test my first raw-milk cheese. This was a brie I made with a mesophilic culture and just penicillium candidum. Earlier batches of brie were much too dry, so I've stopped adding geotriuchum cultures to the milk, along with 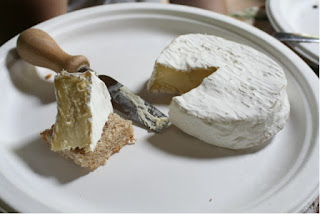 keeping a more careful eye on maintaining a high humidity.

The beautiful golden yellow color of the cheese's paste was the first thing that struck me. Gold like Irish butter, I'd never seen a brie or Camembert in that hue before. Then I realized that was the color of the raw milk, since pasteurization leaves milk with a snow-white complexion. This was really the earliest I wanted to try the brie, so it was still modestly firm in the center. But it still had a creamy taste on the palate, with a distinct raw-milk grassy-ness. I have two more bries from this batch, so I'm planning on pushing them out a few more weeks to see how much creamier they get.

This past weekend I drove down to Keep Sake Farm for more raw milk. I made another batch of brie, this time using a culture called flora danica, which is supposed to give a much creamier consistency. I also made my first gouda, which came out well, at least in the first stages. What makes gouda different from other cheeses is that you wash the curds with warm water, removing lactose that would otherwise become lactic acid. This results in a milder cheese with a smoother taste. Now I just need a bigger cheese fridge to store all this stuff...
SHARE SHARE SHARE