Inchy inchy, skin the fishy, was the monotone in my head as I laboriously nicked my knife under the skin of a whole fluke. I'd never skinned a flatfish before, but I've spent enough rainy evenings 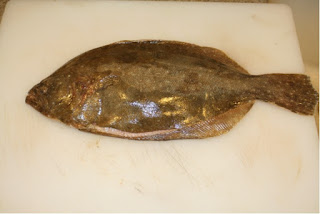 rummaging through my cookbooks to know how it should be done. This was the first time I ever saw a fluke (or any flatfish, for that matter) on sale whole at Wegmans. The fishmonger told me he'd seen a downturn in sales of the more costly whole red snapper, so now he was trying out the more cost-efficient fluke. The fact that it was half the price of a snapper only occurred to me after I blurted out the demand, "I need that one." My determination was set; this was going to be an adventure!

To skin a flatfish by the book, you make a notch at the tail, cut a small flap of skin free, grasp it 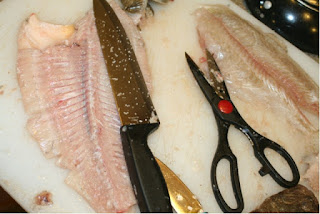 firmly (or at least pinch with vigor), and then rip the skin off with a mighty flex of your arm. After the fact, I confirmed in the book that you're supposed to rip the skin off up to the head, then turn the fish over and keep ripping up and around the head and back down to the tail. And voila! One whole, skinned fish, and a single ribbon of skin to use as crab bait.

Maybe I picked the wrong fish, but my fluke-skinning was not so smooth. The skin came up at the tail easily, but when I ripped the skin forward, it pulled off the thin pieces of meat around the edges of the body. Then small fibers around the spine started to also rip at the meat. So inch-by-inch I slid my knife through these fibers and around the edge of the fluke's body. The head was even worse. The gills cut through two-thirds of the head, leaving a narrow channel of skin 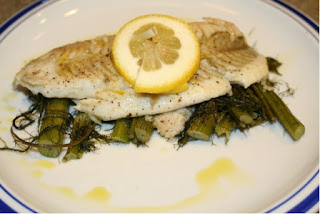 for me to work through. Bony plates in the head made me pretty much throw in the towel at this point.

In more delicious news, I got two beautiful (and hard-earned!) fillets out of this fluke. Pan-seared fluke served over braised fennel stalks with good olive oil and lemon is a victory meal I'd fight for any time. The fluke was succulent, meaty, without any muddiness to the flavor. The fennel stalks added a nice licorice crunch to the moist fish. As for the fillets on the other side of the fish, I just tossed the whole body and head into some more olive oil and roasted them in the oven for a later meal. And you know what? After some time in the oven, the skin just came right off.
SHARE SHARE SHARE