As delicious as they are fresh, seafood dishes always suffer a sharp decline in quality as leftovers. Shrimp become rubbery, fish becomes dry, and scallops smell like the dumpster of a Long John Silver's. 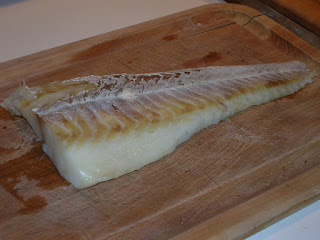 Except for salt cod. Pretty much the sturdiest seafood around, salt cod has been described as everything from "delicious" to "the reason why long-distance seafaring became possible." The name sums salt cod up pretty well; cod, gutted and beheaded, packed in salt to preserve it, then dried to cure it.


Unlike other cured foods--like prosciutto or bresaola--salt cod isn't meant to be eaten "as is." It actually requires 1-3 days worth of soaking in water to leach off the excess salt and make the cod's flesh pliable. I say "1-3 days," as it all matters with how diligent you are. If you change the water every 1-2 hours, you'll rapidly flush the salt out. If you're like me and change the water once in the morning, once upon coming home, and once before bed, give it two days. 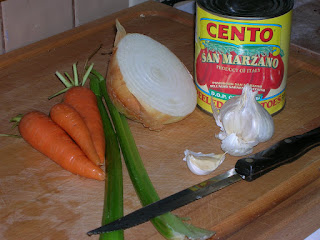 While it does take a bit of forethought, I love salt cod because it can be eaten as leftover for four days and never become rankly "fishy." Mario Batali once described it as "pungent," but I wonder if that was more for fish-phobic readers, as I find it to be on the same level as salmon. I also love salt cod because once dried it lasts forever (well, several years). You can keep it in the fridge and just pull it out whenever you need. Unfortunately, due to overfishing of cod, it's no longer cheap, but now about $7-8 lb. But the good news is that once you soak it, it'll swell up another 30%.

Another benefit is that once cooked, the salt cod stays in good, delicious condition for about 4-5 days. I've made myself a big stack of salt-cod empenadas for lunch and still enjoyed them as 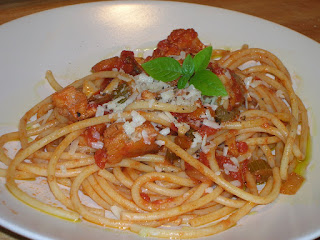 much on Friday as I did Monday. But this time I just made a quick marinara sauce (using those fancy San Marzano tomatoes that used to sauce up my tripe), then slid in my chopped salt cod to cook through for the last ten minutes of cooking. While that was simmering to a finish, I boiled up some bucatini pasta, which is just spaghetti that has a narrow channel running through each strand (bucato translating to "pierced). Sure these hollow spaghetti don't exactly fill up with sauce like a rigatoni, but the hollow channel does give them the most wonderful, plumpish texture.

Combined, the sauce, fish, and pasta made for a dynamite al fresco meal!