A Bouquet of Fish

It's sockeye season at the fish market! I love salmon and like to try to take advantage of wild-caught salmon when I can. Sockeye salmon, along with being delicious, has the added benefit of being much cheaper than the $24-$28/lb king salmon. With a tummy rumbling for fish, Carla and I headed to the fish department.


Not only was a beautiful piece of sockeye there waiting for me, but I also saw another guilty indulgence: wild Portuguese sardines. Wegmans only gets these in once and a while, so I try to snap them up when I can. Dressed with the heads on and guts out, they're delicious broiled or grilled with a robust stuffing to match their rich, oily flavor. 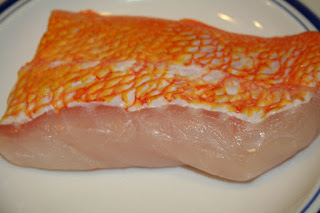 Find of the Day #3 was totally new to me: Arctic Rockfish. Much like a toddler drawn to a shiny toy, I was captivated by the tangerine-orange color of the glistening, glinting skin. Salmon-enthusiasm momentarily forgotten, I ordered up a slab.

Three very different types of fish meant creating three very different types of dishes. The salmon would be very straight-forward with a raw presentation. Although still cool, the brief splotches of summer weather we've enjoyed here in Pennsylvania put me in the mood for a snappy, citrus ceviche. If you want to try some raw fish preparation, ceviche is a great way to go. Simply marinate it in an acidic bath of lemon/lime and orange juice or other acids. The first time I made one, I blended a melon-infused vinegar with lime juice to make a salmon ceviche, serving it on toasts and crispy "chips" made out of salmon skin. 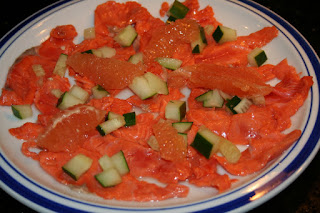 Although it might sound risky, consider the fact that the most well-known ceviche dish is scallop ceviche. Then remember that scallops are filthy little filter-feeders and eat the waste of everything else in the water. Just ask the fishmonger when their fish comes in and show up on that appointed day.

To preserve the flavor of the wild salmon, I used a basic citrus marinade of 3 parts lime juice to 1 part grapefruit juice. I allowed the citric acids to "cook" the fish for about one hour, until it achieved a milky, opaque look to it. I then spread it out lovingly across a serving plate, like you would with your very best prosciutto, and garnished it with supremed segments of grapefruit and diced cucumber for a bit of crunch.

I was happy with this dish, but wished I had made it with regular farmed salmon. Don't get me wrong, the taste was great! But I feel that you lost the extra intensity wild salmon has with all 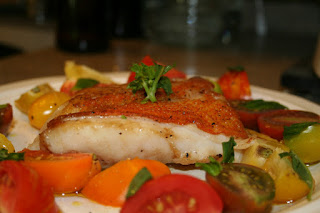 the citrus flavors. In the future, I would keep the salmon totally raw, like a tartare, when I want to capture the pure essence of wild salmon.

The rockfish received a similarly summer-y treatment when it came time to cook. I was really entranced with the orange skin, so my goal was to saute it in a hot enough pan to get a nice crispy skin on top as a centerpiece. I ended up using my hand to press the fish firmly against the skillet as it fried, ultimately giving me the results I was after. Meaty like monkfish, but with a taste like red snapper, I encircled the rockfish with a salad of heirloom tomatoes and minced basil. A splash of fruity olive oil and dinner was served! 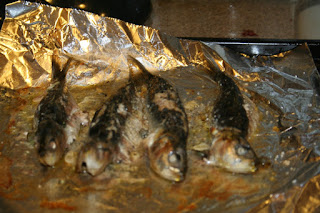 As for the sardines, well, Carla has never been much of a fan, so I just stuffed them with garlic and oregano, then tossed them under the broiler. Later that night, they made a delicious snack to munch on with a dab of grainy mustard and a pint of bitter ale.
SHARE SHARE SHARE