It is done. I broke open my very first homemade cheese on Sunday, after about two months of aging. For the first month the cheese was aged bare to develop a rind (along with some natural molds), before being dipped in wax and aged for an 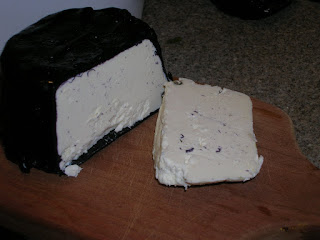 additional five weeks. Before waxing, the cheese tasted like Wensleydale (tart and fresh) with the texture of Lancashire (crumbly).

Upon splitting the wax, I was surprised at how dense the cheese looked. The cheese broke open in curved, blocky chunks, much like how chocolate breaks. It had a dense texture, but melted upon the palate like butter or lard. The flavor was fair. It was still fresh and slightly tart, with a taste of lemon zest. If you remember my earlier posts on this cheese, it was a disaster to start. One of my stopgaps to save the milk was to up the acidity of the curd by adding lemon juice (like when making feta or paneer), which has now carried over into a more concentrated lemony flavor.

After the initial tartness and citrus, there's a clean, fresh flavor with a very brief finish. Each time I take a bite of this cheese, I feel like I'm eating a cross between cheese and butter. I think it's mostly the dense but creamy texture, like what a Welshman would pass off as cheddar. The rind tasts like a blue cheese, most likely from all the molds that set up shop as the cheese aged unwaxed. I made an asparagus and basil pizza with the leftovers and it still melted beautifully, so it probably was mostly butterfat. An interesting first start, but I'm just thrilled it was edible!

I'm not sure why the cheese changed from crumbly to smooth and dense upon aging in the wax, but it does give me inspiration. Many farmhouse purists argue that the only way to age cheese is with a natural rind or a cloth rind. But clearly this cheese underwent some rather stark changes upon being waxed. While I still want to try my hand at cloth-binding cheese, I do feel empowered with the idea that aging in wax has much to teach me.
SHARE SHARE SHARE