I cut into the first of my little bries this weekend. This was the batch treated with geotrichum candidum, which results in a tight, dry rind. I wondered if they would get soft at all, but the inner paste of the cheese was very dense, only becoming creamy when warmed by your palate. They really reminded me of a soft-ripened goat 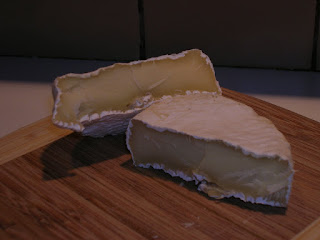 
The big sigh of relief is that they're not too salty. The two recipes I amalgamated for creating my own brie were very vague on how much salt to apply to the rind. Too little salt and the cheese spoils for lack of preservation. Too much salt and...well...you've got a nice brie to grate on top of pasta. But salt is a topic I'd like to talk about more fully in a later post.

To celebrate the 4th of July, Carla and I drew upon our founding fathers' spirit of Independence and made some raw milk cheese. The FDA has a standing ban on any raw-milk cheese being aged less than 60 days...if you want to sell it. As far as personal consumption, you could be putting knobs of broken glass in your cheese for all they care. Although some people warn of 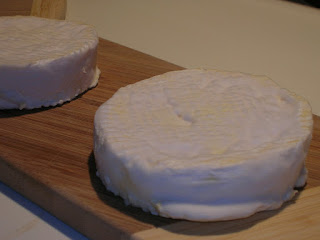 raw-milk giving you a smaller yield with cheese making, I found our milk was pretty much even to a gallon of regular pasteurized milk. One thing I have been more watchful of is keeping a much higher humidity on the cheese. This should ensure the runny texture I'm seeking. In the second photo, you can just see they're getting a nice bloomy rind!

This weekend I'm going to try to make another batch, too. This time I'm using a new culture, Flora Danica, which is supposed to enhance the butter texture, too. It'll just be a pasteurized milk cheese. But good news on the horizon! A local PA cheese making is going to let me spend an afternoon helping them make raw milk cheese! I'm hoping to go down sometime in the next 1-2 months, as I think it'll be a great learning experience.