Blue corn meal looks really cool. When I was a little kid, I thought the blue corn chips Mexican restaurants served with regular white chips were the most amazing thing ever. Granted, I was a bit disappointed that they didn't taste as alien as they looked. But the awe-factor stayed with me. 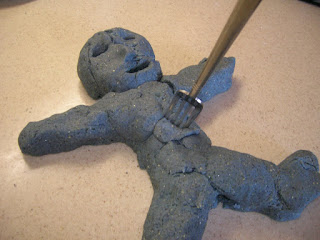 Two days ago, when I found the blue cornmeal I used to coat my chiles rellenos, I went a bit overboard and bought more than I needed.

Thankfully, it's cheap stuff. But still, a use needed to be found for it. How about homemade tortillas? Ever since I saw the bonus feature on the Sin City DVD, where director Robert Rodriguez shows how to make his grandma's breakfast burritos from scratch, I've wanted to make my own tortillas. So today is the day! I nabbed a recipe from google and started mixing. The recipe was for 3 cups of white flour, but I used 2 cups of blue corn meal and 1 cup white flour. The idea was that the cup of white flour would allow the dough to still have some gluten develop during kneading and create a tender, pliable tortilla.

The dough looked like play-doh. Which is why you're looking at a little blue cornmeal effigy with a fork in its tummy. A digression? Perhaps, but a fun one. The recipe said to only let the dough rest in the fridge for 10 min after kneading. Normally for pasta I let it rest for 30, but decided to 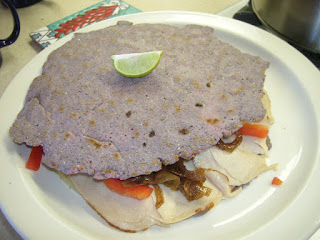 error on the side of the recipe. Then I tore them into small, clementine-sized balls. I flattened them into thin little pancakes and tossed them dry into a hot skillet.

But perhaps I should have held back on my 2:1 ratio of corn meal and flour. While the tortillas tasted good, they were rather dense and crumbly in texture. I think I should have flipped the ratio, so they would have enough flour to stay soft and roll-able. But once filled with provolone, roast turkey, caramelized onions, and bell pepper, you could excuse the mealy tortillas. And they gave me an even wilder idea for a blue dinner: blue corn meal polenta!
SHARE SHARE SHARE