Last October, at the Epcot Wine and Food Fest, I bought a fried empanada for $4.25. Before biting in, a Hispanic woman nearby said to me, "For that [price], I could make a dozen empanadas." 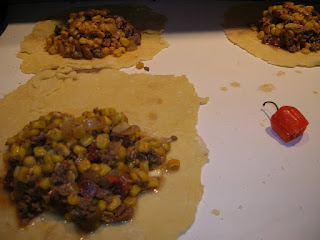 For whatever reason, that's been floating around in my subconscious, next to the moment when I thought "What if you made peanut brittle, but with ham?" Tonight, I acted on one of those ideas.

An empanada is a hand-held pie filled with a savory meat/cheese/vegetable/something-filling. I thought empanadas were always fried, and not really an everyday food. Turns out many empanadas are baked, not fried. The baked ones can be sandwich-sized, but the fried ones are usually ravioli-sized, so the crust can fry evenly and the insides cook through.

The crust of the empanada is made like pie crust, but with less butter and more milk. Too much butter, although resulting in a flaky crust, would crumble in your hand. So 2 cups flour, 1 tsp salt 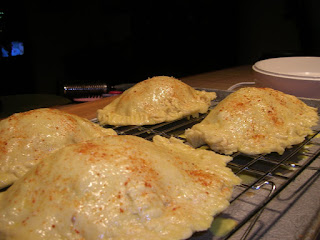 , and 1 tsp baking powder is blended with 3 tbls butter, a beaten egg, and 1/4 C whole milk. That's lightly worked together, then put in the fridge to rest.

I took a Spanish-theme to the filling, boiling ground beef, corn, arbequina olives, chorizo, onions, and garlic in a cup of beef broth until a thick, not too-wet mixture resulted. This got seasoned with smoked paprika, a diced habanero, oregano, thyme, and black pepper. I let this cool, so the hot filling would not melt the butter I had worked into the crust before it got into the oven.

Since the filling was already cooked, I turned the oven to 375 F so I could just crisp up the crust 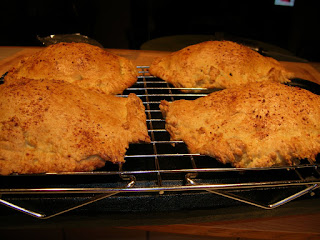 until it was nice and brown. Stuffing the empanadas was pretty straight forward. The dough was divided into four portions, then rolled into ovals. I added a heaping cup of stuffing on one side of the dough, then folded over the dough and crimped the edges with a fork. The tops got brushed with a beaten egg yolk and milk, then sprinkled with Bacon Salt, to enhance the lovely porkiness of the chorizo. 30 min in the oven, then a last 5 min blast at 400 F made for a crispy flake crust.

Richly seasoned and filling, all I need for next time is a bit of salsa or romesco to dip them in. Or a hot, gooey cheese sauce! This recipe seems like a great way to clear the fridge -- chopping up odds and ends and stuffing a hash into savory pastry. Hard to go wrong. For next time, I'm thinking curried shrimp or rosemary ham and veal kidneys.
SHARE SHARE SHARE