Culinary Pen
cooking, curing, salting,
smoking... and eating!
Home » Offal » Is That Your Tongue in My Mouth?

Is That Your Tongue in My Mouth?

After finishing the River Cottage Meat Cookbook, I found myself in a fitful mood for beef tongue. Tongue's a muscle, and tastes much like any other muscle. Veal tongues are tender and mild, 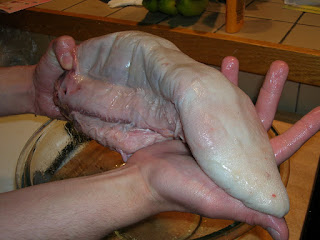 beef tongues are firmer and more full flavored. The one difference is that they have a slightly springy texture, like eye of round. It doesn't have that odd, squidgy, slightly chalky texture overcooked kidneys do. So give it a try!

Wegmans was out of beef tongue, so I went to Walmart, which sells the Rumba brand of fresh organ meats, including smooth and honeycomb tripe, liver, oxtails, and beef cheeks. Tongue in hand, I firmed up my courage and purchased meat from Walmart.

When I first got interested in organ meats (and cooked a bit of beef liver into rubbery oblivion), most of the recipes I could find were tongue with a raisin sauce. While they all were a bit 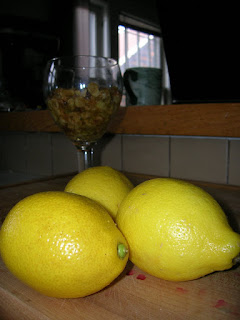 different (some liked mustard powder, some were 25% brown sugar), they all had a generous amount of lemon somewhere in the mix. The one I printed out and stuffed in my recipe binder instructs to cook a whole diced lemon down with the raisins and an onion. This sparked the idea to make a raisin marmalade.

Bitter flavors are often well-tempered by strong meats. Dandelion salad is great with bacon, radiccio is delicious grilled and wrapped in prosciutto. So why not beef tongue with marmalade? A thick, spreadable jam would also allow me to have this as a sandwich for lunch, compared to a soupy sauce to pour over the tongue. To make it, I cooked down 3 large, thinly sliced lemons in 2 cups water with 2/3 C sugar, and 1/2 tsp allspice. I added one heaping cup of golden raisins that had soaked in 1/4 of sweet Riesling the night before and cooked this down for about 2 hours over low heat. 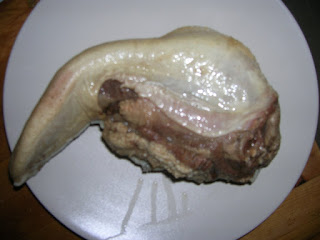 In this time I also poached the tongue in a beef stock made from basic stock veggies, beef shins, marrow bones, and pork neck bones (unsmoked). Once cooked through to 160F, I took the tongue out and prepared to cut off the thick, now-white, outer membrane. On veal tongues, this membrane normally slides right off. Mine was a bit firmer and needed to be sliced off in parts. Then I sliced the tongue into 1/2" slices and prepared a grill pan. 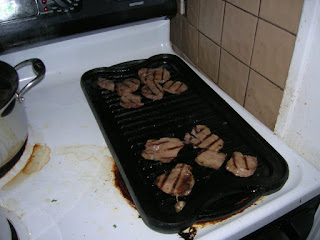 I thought the tongue would be well-suited by a slight char on the grill, to play up the beefy flavors and get a bit smokey. This got a small, helping push with a dash of smoked salt. About 1-2 min per side has the classic-looking grill marks I was hoping for! All I needed now was a mason jar for my now thickened marmalade and some hoagie buns. A few thick cuts of warm beef, a smear of golden raisin marmalade for sweet/sour saucing, and I was stocked in sandwiches to last a week! And if anyone tried one, they'd never think they were eating offal.