While my parents were in Arizona, they picked up a bag of pistachio brittle in their travels. I like brittle, but it was never something I craved or really went out of my way for. But this pistachio brittle, in a quiet, subtle way, would call to me from the kitchen. It softly reminded me that I should eat some more, least someone else beat me to the remainder of the bag. Soon I found I had completely devoured my nutty love. 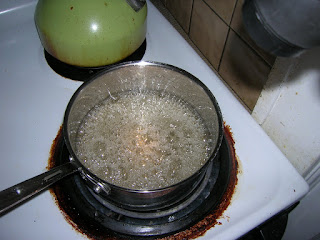 Back in chilly Pennsylvania, I took it upon myself, a la Dr. Frankenstein, to recreate my departed soul mate through the powers of culinary science. Luckily, a recipe I found for brittle seemed to be very straight forward. Boil 3 cups sugar with 1.5 cups water, dump in 1.5 C nuts, and spread on greased wax paper. Plus, I was armed with a silpat. A silpat is a silicon mat that is great for spreading sticky foods on while they cool. I mostly use it for creating cheese crisps. The slick silicon is suited for high heats, but the cheese comes off like magic - no burnt-on sticking.

So why do cashew brittle, when I was so enamoured with pistachios? The biggest reason is that cashews don't need to be shelled like pistachios do. Since this was a first-attempt, I decided to minimize my risk with the cheaper, and less labor intensive, pistachios.

Making the brittle was pretty easy, although making the sugar caramelize did take about 15 minutes, longer than I assumed. And once I added the cashews, the mixture set up incredibly quickly. If I had delayed, it would be one big ball o' brittle. The results were delicious and perfectly salty-sweet, but not quite the same. Looking at recipes for toffee (which adds butter 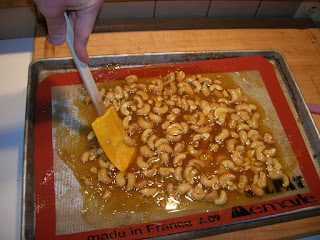 and other flavorings), I think what my parents picked up was more of a pistachio toffee. The brittle I made is much sharper, while the pistachio brittle had a softer, buttery flavor.

But why stop there? Apparently online you can buy Bacon Brittle, a blend of pecans and bacon bits. What I think would be a great application is adding some heat to it, for the ultimate in sweet heat. And with the boiling sugar caramelizing around 330 F - 350 F, could you fry in boiling sugar? Also, I'm curious about adding maple syrup to the sugar for maple pecan brittle. Or instead of maple-glazed pork chops, why not give the chop's outsides a quick splash on the sugar and make maple crusted pork chops? Clearly, I need to check in with my dentist, then begin some serious research.
SHARE SHARE SHARE

I think the innovation "fry in boiling sugar" will be remembered as both the best and worst thing to happen to America in a long time. :D