On Saturday, Zeno's Pub in State College did an "Exotic and Oddballs" themed beer-tasting in their series of monthly beer tastings. While I was a bit surprised that they didn't have much in the way of darker beers, they did have a tasting themed totally on dark beers last month. That might be part of the reason. Anyhoo, I found it to be a great time and wanted to share what they featured. The description in quotes is how they described it, what follows are my own thoughts:

Bells Hopslam - "A big, strong, sticky of an IPA brewed with honey. Surprising at 10%." The nose on this beer was totally honey, but that quickly followed with a big baseline bitterness that filled out the beer upon tasting. The bitterness did have some nice flavors throughout, but "Hopslam" really does sum this one up. 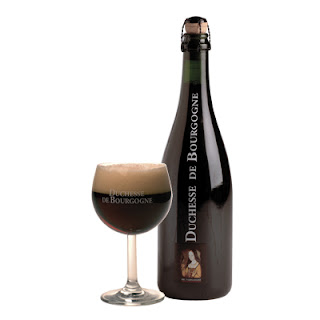 Dogfish Head Aprihop - "Mildly hopped apricot ale...not your average fruit beer." Nice beer with a great Apricot flavor. While I think Dogfish makes more unique beers than this, this would be a great beer to introduce to someone who thinks of Magic Hat #9 as a "fruit beer."

Duchesse de Bourgogne - "Classic Flemish red/brown. The aged balsamic of the beer world." I was a bit worried about this one. Knowing that the most famous Flemish cheese (Mimolette) tastes about as boring aged as it does young, I wasn't sure if this beef would be any good. But it was my favorite. Totally hit the nose with balsamic notes of syrupy fruit, prunes, and cherry wood. Red grapes along the finish. Made me think of an Imperial Red Ale...not sure if that exists.

De Ranke XX Bitter - "Belgian IPA. A Belgian golden hopped way past usual Belgian standards of old. An emerging style." De Ranke was foggy like a wheat beer, with a mild first impression. It had some rising bitterness on the second taste, but my palate was still reeling from Bells Hopslam to consider this beer particularly bitter.

Troegs Bourbon Barrel Aged Mad Elf - "An experimental from Troegs. Awesome! Belgian-inspired big ale with cherries and honey." This one was really good as well. It has a big smell of bananas in its ester-y nose, usually from the yeast producing iso-amyl acetate (not from actually adding bananas). The finish had a bit of an alcohol burn, so this one probably has a high ABV%.

Voodoo Love Child - "Belgian inspired...a western PA masterpiece made with passion fruit." This beer did have a nice, distinct passion fruit taste. Other than that, it was OK. I would probably like it more if I stumbled across it, but I expected it to be pretty strange to be here. But it was nice.

Jolly Pumpkin Winter Noel - "Cask-conditioned sour from the masters." This was a mild sour beer, not like Cantillion-sour. It was flat and had a lime-marmalade flavor.

Uerige Alt - "A schtickfass (German gravity keg). A German dark ale the 'old' way. Not cask-conditioned." This beer tasted a lot like brandy, with swirling notes of malt, fig, and raisins. It finished with a hint of alcohol.

Victory Wild Devil - "The outstanding Hopdevil recipe, fully fermented with the yeast that produces tart flavors, Brettanomyces." This is the yeast that's hanging out in my lambic carboy right now. Usually lambics don't have a ton of hops, like Victory's Hopdevil, so this one was 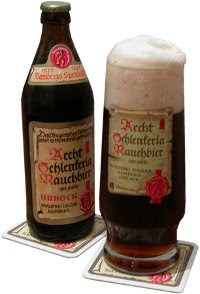 interesting. You got the hops and a stingy lambic tartness, but not an overwhelming amount of either. The nose was actually rather pleasant, with peaches and apricots.

Schlenkerla Urbock Rauchbier - "A German specialty made with malt kilned over fire. Wow..." This beer tastes like ham. A guy next to me said "baloney," but his friend insisted it was "beef jerky." I feel like you'd need food with this. The smoothness of the lager allowed all the roasted, smokey flavors to really come to the forefront. Wine Specialist drank a pint of scotch before tasting this beer and detected "just a touch of smokiness in the nose and palate"

Unibroue Quelque Chose - "A Belgian-inspired cherry ale. We chose to serve it hot today." Apparently the brewery actually recommends this to be served hot. Very interesting. Like a hot cherry cider/toddy. Slightly medicinal in flavor, sharp, with a bit of lambic tartness. I wonder if hops taste stronger in warm beer, in the same way cold numbs flavors?

Weyerbacher Fireside Ale - "A lightly smoked dark ale." This one was what I looked for in a smoked beer. More smoke, less ham. Stone's Smoked Porter is still my favorite.
SHARE SHARE SHARE

So I'm guessing Wine Specialist wont be your most trusted review source from now on. "Touch" isn't the word I would use.

Actually I just realized the link you posted was for the Helles version. They also have a Marzen and Weizen Rauchbier. Here is the link for the Urbock Review, much more accurate.
http://www.winespecialist.com/ecart/product.asp?pID=3969&cID=81