Now, whenever I leave milk out on the counter overnight, I can just say I'm making Kefir. Well, not really. Two weekends ago, Carla and I bought some live Kefir grains, which are " a combination of bacteria and yeasts in a matrix of proteins, lips, and sugars. This symbiotic matrix forms grains that resemble cauliflower." (To quote wikipedia.) I don't know what kind of tiny cauliflower that guy eats, but to me it looks like couscous made out of yogurt. But Kefir is somewhat similar to yogurt, both bacterially 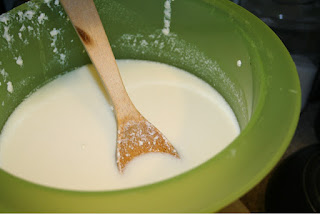 thickened, although Kefir thickens at room temperature, while yogurt needs to be held at 110 F for the thermophilic bacteria to convert the milk to yogurt.

Kefir does take longer to make (24-36 hours, or more), and to me it has a bit more tartness to it. It's also much thinner than yogurt, like those stylish, drinkable yogurts. It's also slightly carbonated, which is a side-effect of the Kefir grains fermenting the lactose into lactic acid. Like yogurt or raw sauerkraut, it's also chock full of beneficial baterial and whatnot. Kefir hails from the Caucasus Mountain Range, where Europe turns to Asia, geographically.

You can buy Kefir in the health food dept of many stores, but I would recommend tracking down some grains if you find you like it. The grains cost about $7, but they are a living, endless reproducing organism, so the more Kefir you make, the more grains you'll have. Don't buy Kefir starter or freeze-dried Kefir, or other items like that. They're only good for one batch and cost about the same as the living grains. We bought them from a local co-op, who ordered them along with their weekly raw milk delivery. The first batch we made was all raw milk, which resulted suuuper strong and tart Kefir. Nowadays we just use the less costly 2%, mix it with the grains in a mason jar, cover it with a cloth, and then stash it in a dark cupboard for a day. Tart, tangy, and terrific!
SHARE SHARE SHARE