Fungi on my Eye

While similar in appearance, but not quite as delicious as chanterelles, Hedgehog mushrooms are abounding at the grocery store! At $24.99/lb, I stretched them out with the also tasty $3.99/lb shitakes. I was in the mood for roast beef, and found a good deal on beef Eye of Round. I've n 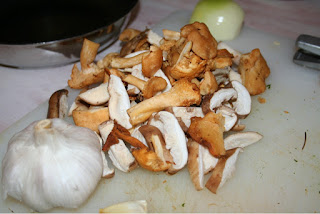 ever roasted this like roast beef, but thought it might be worth a shot. Tender in texture (while raw), it seemed perfect for a hot oven and a rare center.

The mushrooms got a quick rinse in water to get off the outer dirt off, then I lopped off the inedible stems of the shitakes. Some people say you should never rinse mushrooms, but I'm cooking them to draw off their natural water, so it never bothers me if they absorb a few extra splashes. It's all going to run off as steam, anyway. Although, Alton Brown one did an interesting test where he weighted raw mushrooms, rinsed them,and reweighed them. The result was they absorbed an insignificant quantity of extra water. Plus rinsing is much quicker than brushing each one off.

Digressions aside, the beef was hanging out with a paste of garlic, thyme, red wine vinegar, and 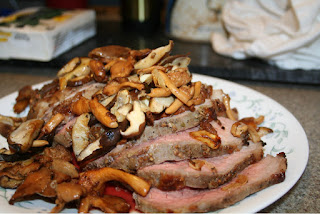 Worcestershire sauce. When cooking mushrooms, I don't like to move them around the pan too much. That way they get nice little caramelized edges to boost the flavor. A quick sprinkling of thyme and pepper, and the mushrooms were ready to top off the beef. The beef eye weighed in at less than 2 lbs, so I figured a good 10 min roast at 375 and finishing at 350 for another 20 minutes should do the trick. Surprisingly, it stiff felt remarkable soft and squooshy after 30 min. So I put it back in for another 10 min and then let it rest for another 10.

Reading up on it later, you don't see many recipes for roast eye of round. Most people use it as a little pot roast. I now know why. It wasn't bad, it just had a bit of a spongy texture. What most surprised me is that it was an extremely light colored roast - almost like pink veal. Beyond these ruminations, the mushrooms were a delicious topping for the roast, and much healthier than a rich blue cheese sauce. They still had a deep, earthy flavor, which complimented the beef, and everything came together very quickly. Definitely something I'd do again, but with another cut of meat. I did notice the grocery store sells vac-packed beef cheeks!
SHARE SHARE SHARE