Fat: An Appreciation of a Misunderstood Ingredient is a cookbook I've received for Christmas and have been working through. I really enjoyed the author Jennifer McLagan's previous book, Bones, and this book continues her love of primary ingredients and one-word titles. I've been meaning to get a few quarts of heavy cream to make my own butter for her shortbread recipe, but tonight I found a butter substitute for baking: bacon fat. 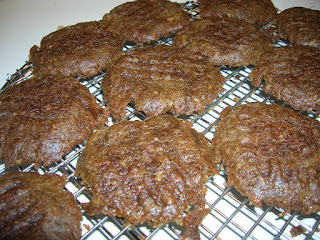 The author explains that many cakes and cookies of Northern Europe use lard, not butter, as their fat. So she made the small leap to think if you could use rendered pig fat (lard) for baking, why not rendered pig fat that was previously smoked (bacon fat) as well? Granted, even before the explanation, I was sold on these cookies when I saw the title "Bacon Fat Cookies."

So one pound of crispy bacon later, I had enough bacon fat to equal 1/2 C. Otherwise, these are straightforward ginger snaps. They get a boost from blackstrap molasses, clove, and cinnamon, as well, to play off the rich, smoky flavors of the bacon fat. I was surprised that she still added salt to the recipe, what with all the salt inherent in the bacon fat. Upon tasting, they did have a nice, fleeting saltiness to them that played off the richness of the bacon fat and sugar. The proportion of fat, however, could have been stretched over a greater amount of flour. The cookies came out crispy and chewy, but a little heavy to eat. With hot coffee, they're excellent. Smoky, savory, sweet, with a faint aroma of pumpkin-pie spices. But with cold milk, the fat seems to cling to the membranes of your cheeks and the roof of your mouth after the rest of the cookie is gone.

I liked these little fat snaps, but I don't see myself making them too many more times. It's rare that I cook a full pound of bacon that would generate enough fat for the recipe. Even when I save my bacon fat, it's rarely more than 1/3 C in the fridge. For a bacon-themed dinner, they'd be a hit, but not something you spontaneously make on a chilly Sunday. Perhaps if you crumbled bacon bits into them? Or used bacon crumbles instead of sugar for creating a crispy top to creme brulee...
SHARE SHARE SHARE