Bounty from the Waves

Well, I finally got my oysters. Wegmans had something of a bounty of seafood in stock this past Saturday, and I had a hard time just picking one thing. So we got a little bit of everything! They had some nice looking Arctic Char, which looks 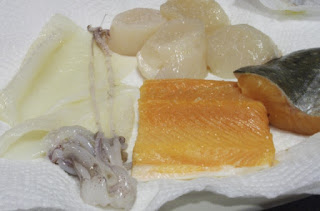 like pale-fleshes salmon, although the flesh is finer with lots of smaller ribbons of flesh than salmon. Along with picking up that, we got six oysters (not sure what kind, as they were given to us in a clam bag), some squid tubes and tentacles, and four scallops.

Even though it was a range of seafood, everything was pretty simple to cook, except for the oysters. One thing I'd like to stress is to always protect you hand when shucking oysters. The first oyster opened easy, so I didn't bother to grab a towel to hold the rest. Only the last one proved to be a problem, a problem that presented itself when my oyster knife slipped and went into the soft webbing by my thumb. Luckily the blade didn't get in too deep, and it could have been much worse. But don't do that.

Anyway, oysters got shucked, hands got bandaged, and I preheated the broiler. I dressed the 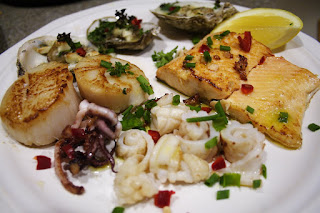 oyster with chopped garlic, parsley, and a splash of olive oil and let them cook under the broiler for about 2 minutes. While that was in, I added the fish to a hot skillet coated in olive oil and let the skin start to crisp. After about two minutes the fish got flipped and the oysters came out. Then I added the scallops and seared them while the fish finished. Once brown and crispy, I turned the oysters and added the squid, which only needed to cook for another minute. I cut the squid tubes into ribbons, which made for easier eating and fork-nabbing.

A quick whirl of olive oil, a sprinkling of minced chives, chilies, and parsley, and we were good to go! Although it looks like a lot, it was actually pretty budget friendly. For the both of us, it came to $17 total, which is much better than a Saturday night dinner out. I'd like to do this again, but it'll be nice to pick out some new seasonal items to vary the line-up. The Arctic Char was nice, but it wasn't as flavorful as salmon, or as nuanced as sole or turbot. But variety is part of the fun of doing a mixed-grill line up like this.
SHARE SHARE SHARE