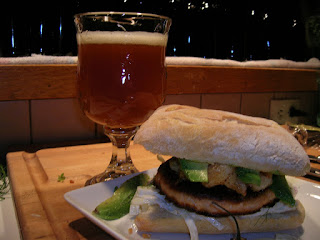 Running about the grocery store burning off the anxieties of the day with far-fetched ideas for dinner can lead to some exciting concoctions. This one kind of got out of my hands and probably should have been both a sandwich and salad, but I dagwooded them together into one towering mound.

I've wanted to try a salmon burger for a while, and tonight I decided to go ahead and pick one up. Frying it up at home, I'm impressed with just how crispy it became. With a small amount of olive oil and medium-high heat, it resulted in a toasty brown surface that reminded me of a well-buttered grilled cheese. They must bind it with bread, as it really held together beautifully.

Things got a bit crazy when I decided set my salmon burger on a bed of ginger fennel slaw. Bound with sour cream and a small amount of O Olive Oil's Ginger Rice Wine Vinegar (http://www.ooliveoil.com/). This is just one of those exceptional products that enhances so many dishes. I also love their Yuzu Rice Wine Vinegar, which I find much more interesting than O Olive Oil's other wine vinegars, such as pomegranate champagne, white balsamic, or porto. They're all good, but don't have that instant excitement I get from the rice wine vinegars. But if you're looking for a vinegar that's just absolutely wild, I would be hard pressed to recommend a brand over Austria's Gegenbauer (http://gegenbauer.at/englisch/start.aspx). Their Fruit Vinegar of Cucumbers has been a favorite of mine for quite some time.

Anyway, we were up to the bottom half of a focaccia bun, topped with fennel slaw, holding up the crispy salmon burger. On top of this I placed three shrimp that I sliced length-wise and then sauteed with Old Bay and half of a minced habanero. The habanero I added towards the end of the cooking time, so as to not cook out all of the fiery oils. To push this one step further, the burger was finally finished off with half of an avocado, sliced thin and sprinkled with salt and pepper, then crowned with the top of the bun.

The burger was deliciously intense. Hot, but tempered with the buttery avocado and cool slaw. And your teeth could hit so many different textures of crackling bread, sqooshy avocado, flakey salmon, and crunchy slaw, with little bits of firm shrimp darting in and out. I paired it with a bottle of my Red Tea Pilsner. It's a traditional pilsner featuring Czech Saaz hops, but brewed with rooibos tea, rather than plain water. The lightness of the beer works well here, allowing the floral nature of the tea to really shine through. The Red Tea Pilsner tastes like a slightly malty glass of rooibos, with some cleansing bitterness at the end. For the most part, I used plain rooibos, but a small amount of "flavored rooibos" was added, which contained hibiscus, rose hips, vanilla, and dried citrus zest at about 12 parts plain rooibos to 1 part flavored.

Well, this certainly veered off topic a great deal.

I would hate to turn a good fresh salmon steak into a burger. But I used to buy canned Alaska salmon (sustainable fishery!) a lot. It is relatively cheap, and would probably make a great burger!

It does! I'd blend it with bread crumbs and a small amount of flour and dried dill to make little salmon patties. Fried up and served with a blend of mustard mixed with liquid smoke, they make a classy brunch, so long as you hid the fishy can deep in the recycling bin from anyone's eyes.