A Quesadilla For All Seasons 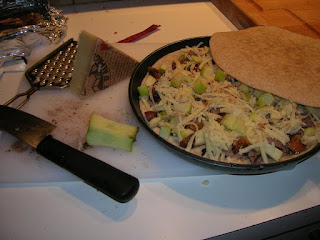 I've been working on cleaning out the various odds and ends in my freezer, in hope that next week's deer hunting outing fills it back up again. Earlier in the summer I had three friends over for a grilled duck breast tasting. I picked up 3 pairs of aged Magret duck breasts from D'artagnan - weighing about 1.5 lbs per side. One of them I ate myself the night before, and four I grilled up myself, each on in a different sauce. Well the last one has been sleeping peacefully in a freezer bag since them.

Last night I braised it in 2 cups of Cab Franc, along with a small amount of salt and pepper. Tonight I shredded it and mixed it with 6 diced dried figs, 1 large green apple, and a small amount of the reduced wine and duck fat. Spread out on a tortilla, dotted with a thinly sliced hot pepper, and then fished off with a scattering of shredded Etivaz cheese.

Etivaz is sort of like cave-aged Gruyere, but made by people who think cave-aged Gruyere sold out and is watered down. So this small Swiss canton started making their own raw-milk, pungent gruyere that's so amazing it was granted A.O.C. status. Its got a lot of tang and a bit of a sticky, zesty finish. And stinky cheeses are great with dark meat. 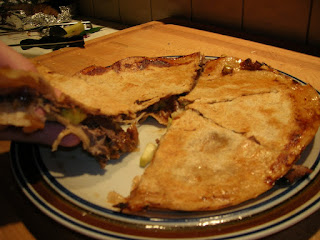 All in all, I was very pleased with this - perfect for fall, crunchy, sweet, mildly aggressive, and very filling. I do feel like the tortilla could have benefited by being a darker bread, but I think I might be able to remedy that by adding some black beans next time to up the flavor of the starch...but that's starting to sound like a burrito.
SHARE SHARE SHARE