Nothing as Divine as Maple Time 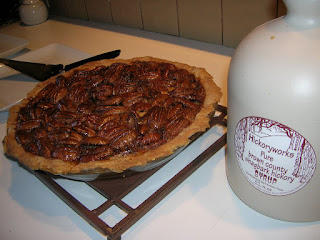 About two years ago I found what's still my favorite "tree syrup" in the world. It's similar to a maple syrup, but made from Hickory in Indiana, rather than Maple in Vermont or Canada. Produced by Hickoryworks, I stumbled across their Hickory Shagbark Syrup in a small 8 oz tub. After falling in love with the product, I splurged on a 64 oz jug of it.

It's texture is thinner than that of Maple Syrup, which might be the result of less reduction time in the processing. The initial flavor is sweet, but not cloyingly so. Then you get an smooth nutty flavor, like a mix of hazelnuts and pecans. The last taste is that of an earthy, woodsy flavor, with a slight tinge of bitterness, as you'd find in radicchio. My absolute favorite use for it is to whisk into a bowl of salted grits. Then I push a knob of butter into the center and try to get a bit of the butter on each spoonful of grits.

I found out that Hickoryworks also makes a Poplar Syrup that I'd love to try, but the responsible part of my brain decided I need to run through the rest of this jug before getting a second. Since you can only eat so many bowls of buttered grits in a day, I've been trying out a range of recipes, one of my favorite being Pecan Pie.

This was a pretty simple and straightforward recipe. I melted 8 oz hickory syrup with 4 oz brown sugar and 4oz of corn syrup. I heated it until it was smooth, then added 5 eggs, 1 tsp vanilla, bit of salt, and half a stick of butter. Toss in some Choctaw pecans and put into my rolled out pie crust and bake at 350 for 55 minutes. It was deliciosly crunchy, with a sugary-custardy middle. A bit on the rich side, I was able to spread the last half of the pie's calories around when a friend invited me over to help him and his wife butcher a deer he'd shot. Nothing like fall than eating Maple Pecan Pie and bagging venison into freezer bags. Only 20 more ounces of syrup to go!
SHARE SHARE SHARE

That's fascinating! I had no idea that syrups were made from the sap of trees other than sugar maple. I look forward to trying it sometime!

I was in the same boat before finding this syrup. Apparently you can even brew beer using maple sap (just as it comes out of the tree, not boiling it down to become a syrup reduction), as they used to do before having spare wheat, rice, and other grain crops to ferment.

That's a little scary about the NPR study. But then my old room mate preferred the pure sugar flavor of "fake" syrup over the real thing.