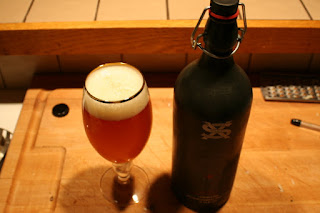 Picked this up in Nag's Head this past summer, along with a bottle of Rogue's Brewer's Ale, commemorating the passing of Rogue's beloved pet and chairman brewer. While I've had Imperial Stouts and Imperial Ales, I've never tried an Imperial IPA, so I curious how this would hold up. Coming in at 71 IBU's (blending Saaz, Cascade, and Northwest Golding Hops), I expected a good amount of hops, especially for an Imperial IPA.

If you're not familiar, the prefix "Imperial" in front of a beer style (in a one sentence definition) just means all the ingredients go in super heavy. Lots more grain create a denser beer, a lot more hops up the flavor and International Bitterness Units (IBU's), and usually contain a higher alcohol level, which allows these beers to age wonderfully and work through all those extra layers of flavor.

Once poured, the beer surprised me. Very opaque, sort of burnt orange and light caramel in color, all swirling under a dense lacy head. The mouthfeel itself was very thick, which stayed true to my expectations of the beer. It did have a ton of hops to it, exploding with big, citrusy flavors and bitterness opening a cornucopia of grapefruit zest and pith. Almost as if a jar of really good Seville orange marmalade was mixed into an IPA, thickening and up-ing the bitterness and citrus nature of the beer.

Rogue's Imperial IPA was a great beer, but in a way I expected the hops to be decimating. It didn't strike me as being much hoppier that a glass of Arrogant Bastard. Granted, an excessive amount of hops would make the beer probably less pleasant to drink. Besides, Rogue's always very even handed with any beer they produce. They're very good about striking a balance between intense, unusual flavors and subtlety. So maybe my expectations were just off. Looking to the future, their Brewer's Ale clocks in at 106.9 IBU's, which I'm sure will provide the Sturm and Drang I'm secretly craving.
SHARE SHARE SHARE