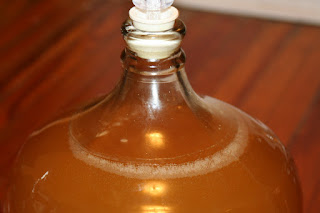 Two or three weeks ago I brewed my first batch of mead. Mead is basically fermented honey broth. Using about 10-15 lbs of honey per 5 gallons of water, you can create a sugary honey broth similar to using malt to create beer. Unlike beer, however, you use acids (usually a blend, or just citric acid powder) to cut the sweetness of the honey. Similar to the bitterness of the hops, but without the preservative powers of the hops alpha acids.

Something I find interesting is the possibility to create single-varietal meads, by using honey from a single variety of flower. This flies in the face of most brewing conventions on balance, such as using a blend of both sweet and tart apples to create a cider, or stacking different grain ratios with beer. But the subtle and intricate flavors of single-varietal honeys are just so unique and interesting, I think it would be worth something to at least experiment with it.

The mead I currently have percolating away was made with 15 pounds of Eucalyptus honey. It has a barely perceptible pine-y, herbal flavor, but I wonder if that will get washed out in the fermentation and rampant activity of the yeast? Well, that's all the fun of your first batch. Next weekend it will be over a month old, so I'll be checking the gravity and seeing how close we are to bottling.
SHARE SHARE SHARE