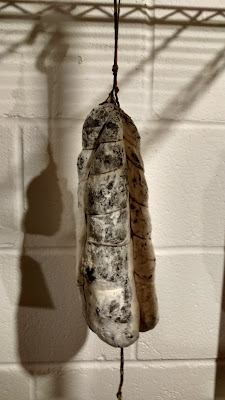 This was my first foray into curing whole muscle beef, and only my second time curing beef in general.  Bresaola is one of the few beef items in classic Italian charcuterie, but dried, salted beef is widely available in South America.

I'm curious if the widespread presence of cured beef in South America is a remnant from Spanish imperialism.  Cecina is cured beef in Spain, specifically Leon.  Perhaps, as the Spanish conquistadors moved through the Pacific coast of South America, they brought along the techniques of making cecina?  Or was curing beef already an established practice when the Spanish arrived?

It's a pretty obscure historical footnote, so I haven't found much information.  It seems like the Incas mostly dried fish and did some small strips of air dried alpaca and llama jerky.  But that's a rather long digression... 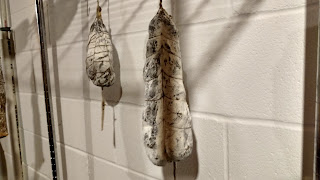 Traditionally bresaola is made from beef round: the back leg of the cow.  It's very lean without much intramuscular fat.  The lack of fat would make it easier to cure, as the fat is most likely to go rancid in a primitive curing situation. 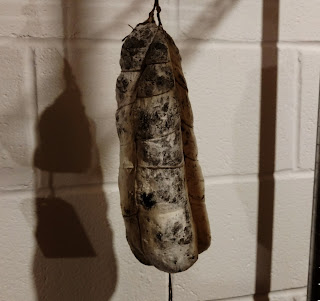 But for this bresaola I wanted to try something different.  I bought a chuck eye roll from McCann's local meats in Rochester.  The chuck is the front shoulder of the cow, while the chuck eye is the same muscle that is used on the pig to produce coppa or capicola.  The chuck eye has lots of intramuscular fat and is heavily exercised as it supports the weight of the animal's head.  My curing chamber has been performing very well, so I think I won't have a problem with rancidity.  Hopefully the intramuscular fat will help give this bresaola a softer texture and richer flavor.

So this bresaola was equilibrium cured for two weeks in the refrigerator, then cased in a beef bung and tied.  These photos are just after the 30 day mark of hanging.