Books: The Food of a Younger Land: A Portrait of American Food

For Christmas Matt gave me a copy of The Food of a Younger Land: A Portrait of American Food Before the National Highway System, Before Chain Restaurants, and Before Frozen Food, when the Nation's Food was Seasonal, Regional, and Traditional : from the Lost WPA Files by Mark Kurlansky, author of Salt, Cod, and several other books.

It's a fascinating book, not so much written by Mark Kurlansky but curated.  He sorted through hundreds and hundreds of articles written during the Great Depression, contracted by the Works Progress Administration as part of the New Deal.  While I knew the WPA gave jobs to construction workers to build bridges, foresters to clear land, and artists to create, well, art, I had no idea they also employed out-of-work authors, journalists, and editors to write articles for guide book series.

Once the guide books were completed, the WPA had their writers begin to work on a new project, collecting stories, recipes, debates, and opinions on food.  Unfortunately this series was never published, as the government shuttered the project after Pearl Harbor and directed all resources to the war effort.  Many articles were not finished, some were lost, and some burned in library fires over the years.  Those that survived in the Library of Congress were sifted through by Kurlansky became The Food of a Younger Land.

Kudos to Kurlansky, as I think he chose a very interesting array of articles.  He said he didn't want to just choose the best articles, as that wouldn't show the full scope of the project.  There are short, peculiar articles that feel like they were written by a grade-schooler, filled with jerky, stop-start sentences.  The book has some wonderful recipes, and then some bizarre recipes that were clearly never proofread.  Ingredients appear at the beginning of the recipe, then are never used.  Whole steps of culinary production are absent.

But I don't see these as a fault, as it colors the book's patchwork collection of writing from across America and at different levels of skill.  The book also has great arguments on the "correct" way to make clam chowder, and fun but antiquated menus of restaurants of the day.  The regions of America also make each section of articles a little different.  Written in the 1930's, the articles from the South have a thread of racist terms and ideology running throughout them, while the West has a very masculine, cowboy wildness to the articles on trapping, hunting, and fishing. 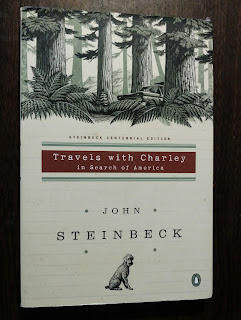 On a different note, it's interesting to compare this book with John Steinbeck's Travels with Charley: In Search of America.  Written in the 1960's, the book catalogs Steinbeck's road trip across America with his poodle, Charley.  In the book Steinbeck laments the homogenization of American culture; every town has the same chain restaurants, everyone reads the same magazines, listens to the same radio stations, and everything seems preboxed and wrapped in plastic. Here are two quotes from the midpoint of the book, in which Steinbeck is talking aloud to Charley:

"...the food has been clean, tasteless, colorless,  and of a complete sameness.  It is almost as though the customers had no interest in what they ate as long as it had no character to embarrass them."

"If this people has so atrophied its taste buds as to find tasteless food not only acceptable but desirable, what of the emotional life of the nation?  Do they find their emotional fare so bland that it must be spiced with sex and sadism through the medium of the paperback?  And if this is so, why are there no condiments save ketchup and mustard to enhance their foods?"

Compared with this bellwether from Kurlasnky's book:

"The old West had a fine tradition of freedom and a noble cuisine to back it up.  So far this has stalwartly resisted the corrupting inroads of the dainty recipes of the ladies' magazines.  As long as this cookery is maintained intact I have no fears for its political future.  And yet there should be a side note of warning:  no race will spring to man the barricades with its stomach stuffed with Waldorf salad nestled in a last of lettuce plus a dab of store-bought mayonnaise on top."