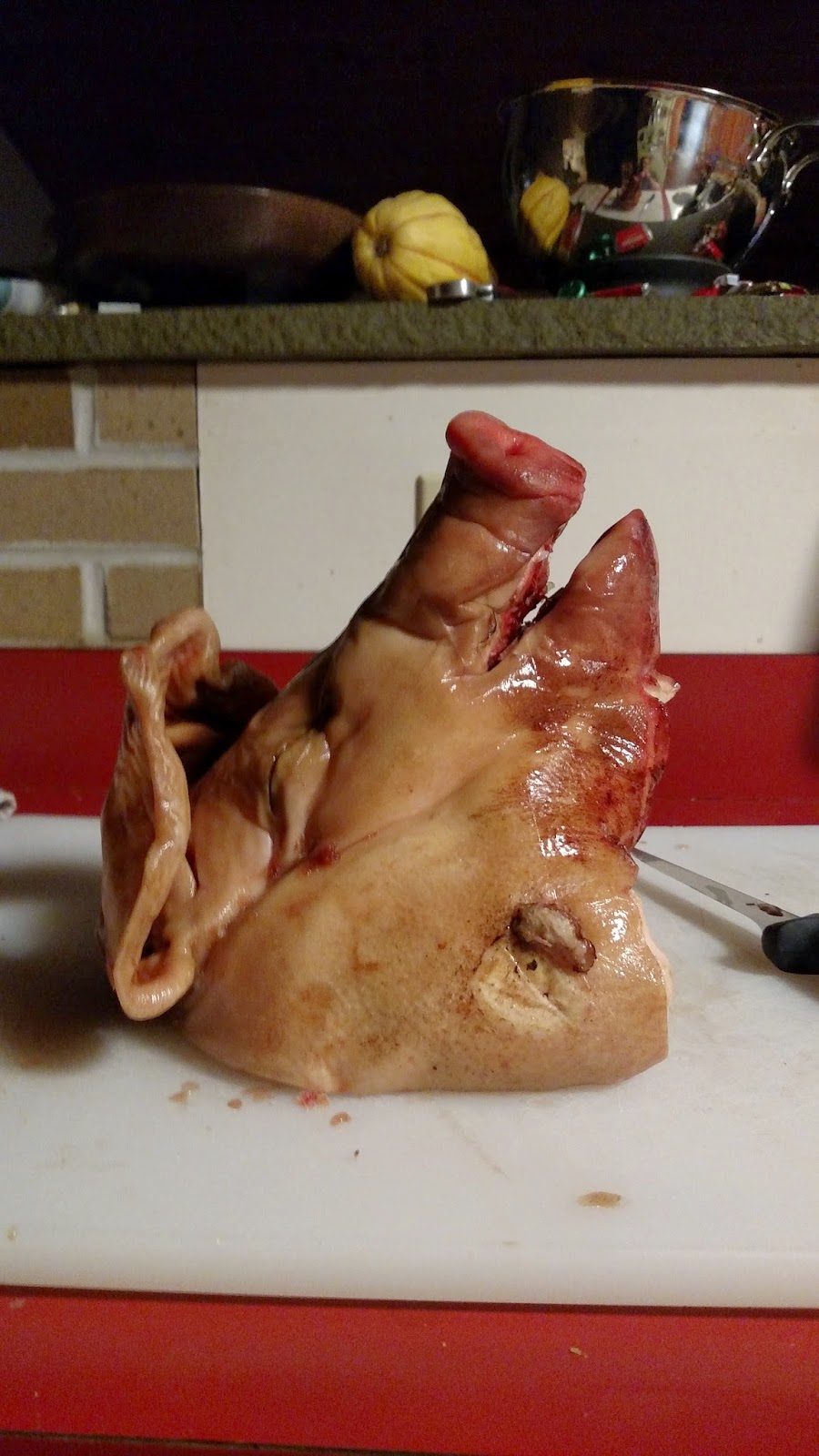 After I fell in love with the Maple Glazed Pig Head with Lobster, I had a problem: Gaspar Farms suckling pig heads come two to a pack.  Well-wrapped, the second pig head slumbered in the bottom of my deep freeze as I contemplated its fate.  Inspiration came at Christmas, when my parents gave me a PolyScience immersion circulator and Carla gave me a vacuum packer.  With these, I could cook the pig head sous vide in a water bath at a constant controlled temperature.

I resisted sous vide for a while, feeling that I might lose some connection to the cooking process.  But reading Thomas Keller's cook book Under Pressure: Cooking Sous Vide turned my thoughts around.  Cooking in a temperature-controlled water bath gives the cook a new technique, he explained.  It does not replace the more "traditional" methods of roasting, sauteing, frying, or steaming.  With sous vide, you have another tool to make the best of your ingredients.  It is still up to the cook to decide on the best method for any particular dish.  And in the case of a pig's head - unevenly shaped and full of fat, skin, tender jowls, dense tongue, and the cartilage of the ears - there is a real benefit to be able to cook all these meats to the same degree.  Immersed in a 165 F bath, there's no way for the meat to cook past that desired temperature. 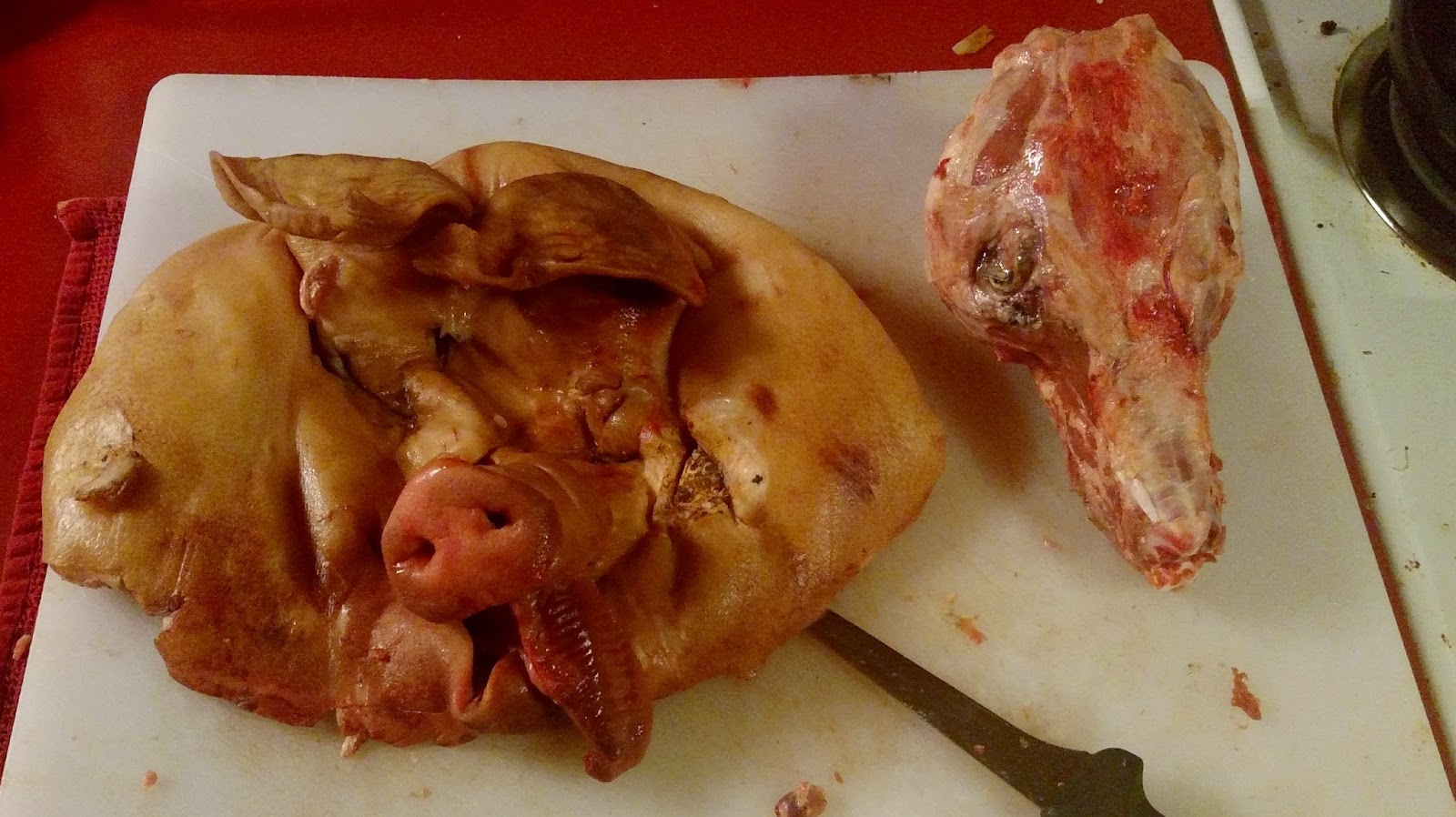 My first task was to get the skull out of the pig.  With the skull removed, I could roll the head up into a solid, completely edible piece.  Taking the skull out of a pig's head isn't hard, it just takes time.  The only skill is to keep cutting right against the bone, following the natural curves of the skull and jaw.  As you can see in the photos, this turned out pretty good aside from a few knife holes in the thin layer of skin on the bridge of the snout. 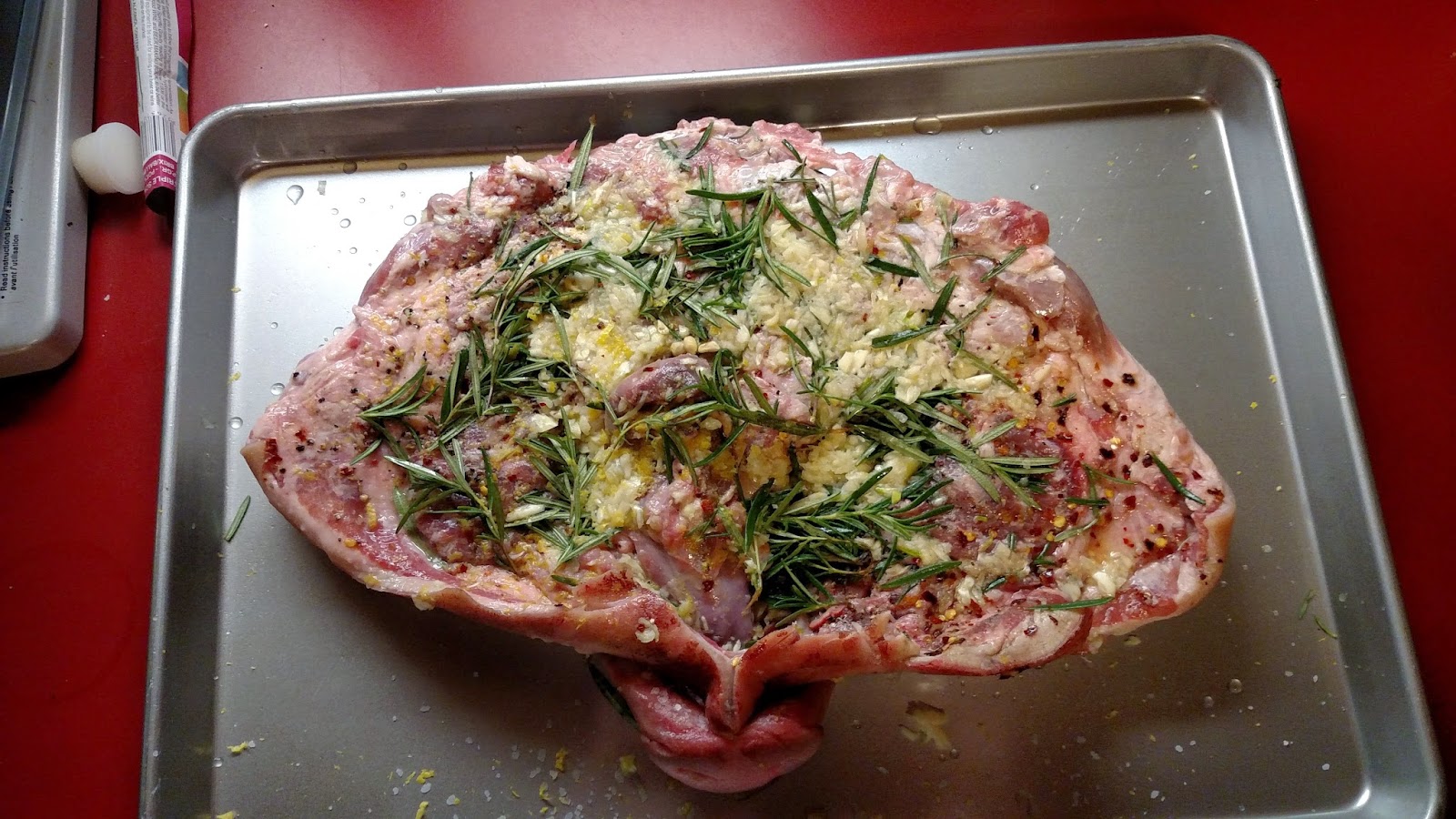 After skull extraction, I heavily seasoned the inside of the head with garlic, rosemary, red pepper, black pepper, lemon zest, and salt.  I let the head rest in the fridge for two days to let the salt work into the meat and draw out any excess moisture.  To keep the ears from flopping about, I cut them off and layered them down the middle.  Then it was a simple matter of rolling up the pig head in cheese cloth and tying the meat tightly with twine.  I used cheese cloth after some internet sleuthing led me to the tip that the cheese cloth will help the head keep a neat shape and aid in removing any rendered fat or gelatin that builds up on the exterior of the heat in the cooking process. 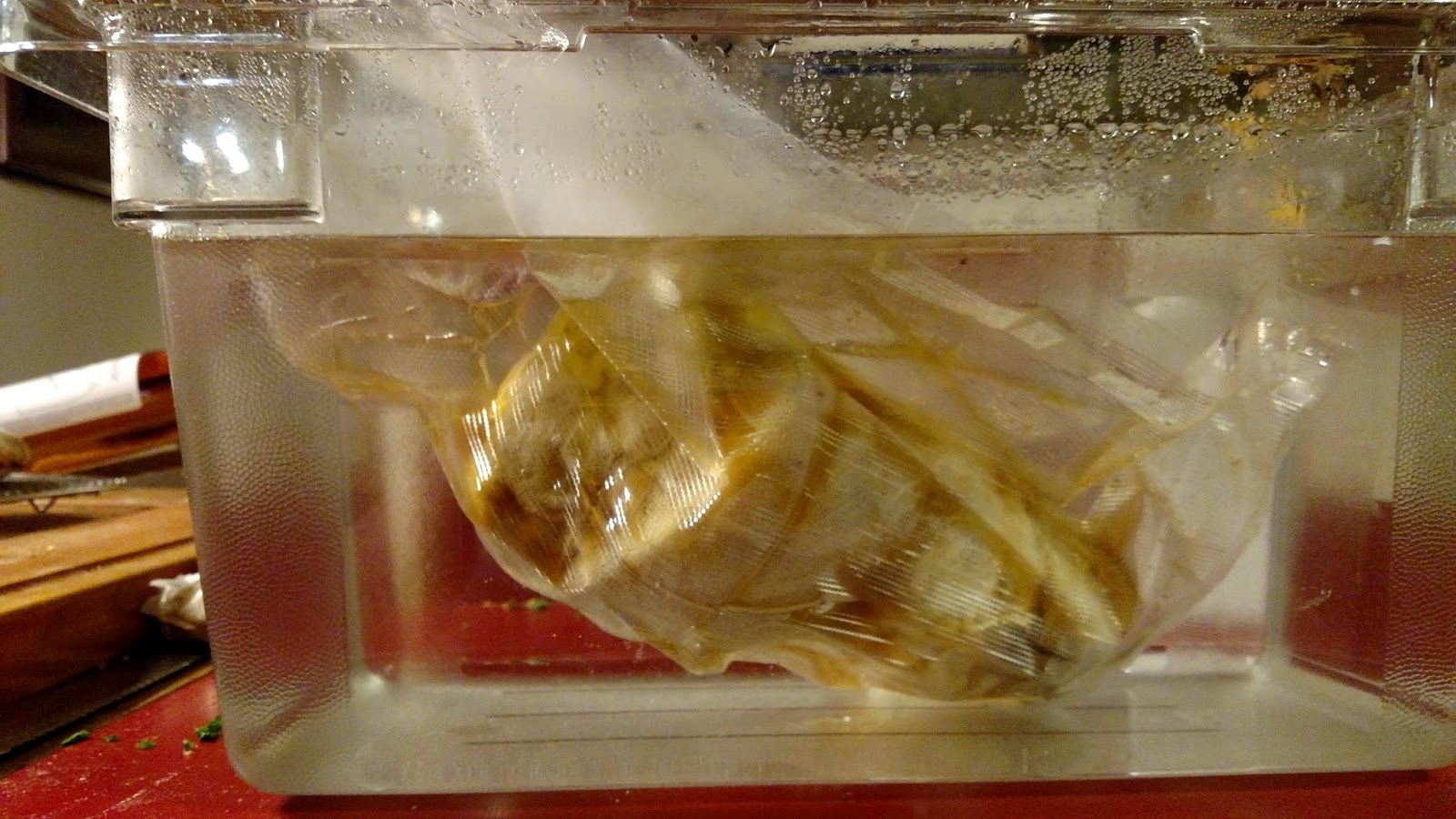 Next, the head was vacuum packed and placed in a water bath at 165 F for twelve hours.  In that time, the head slowly cooked to perfection.  There was no need for me to worry about the thin end of the snoot over-cooking while waiting for the thick base of the head to finish cooking.  With a constant flow of 165 F water, every section of the head cooked to an even temperature. 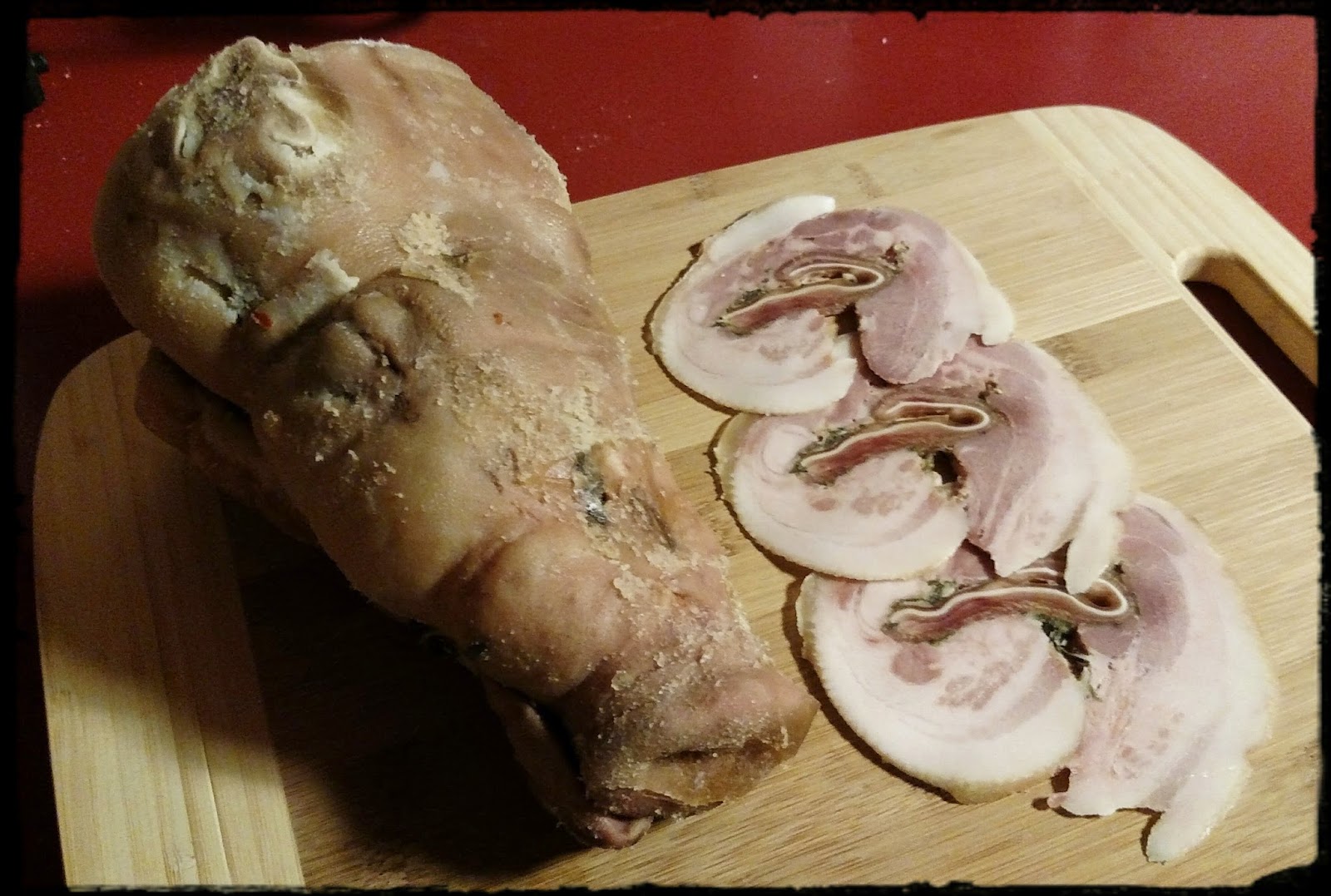 Sliced thinly, the head was delicious on its own.  Eating a platter of paper thin slices reminded me of snacking on a rich salami cotto, or cooked salami, like mortadella.  The skin was tender, the meat succulent, and the ears offered a gentle crunch in the middle.