I always try to make a polite nuisance of myself at the fish department of Wegmans.  Whenever I see they have a whole fish on displau, I always inquire to the whereabouts of the head.  Through this, I've twice acquired salmon heads for free, once been told they were already given away, and one particularly memorable time had to repeat my request and was told, "No, we only sell regular stuff here." 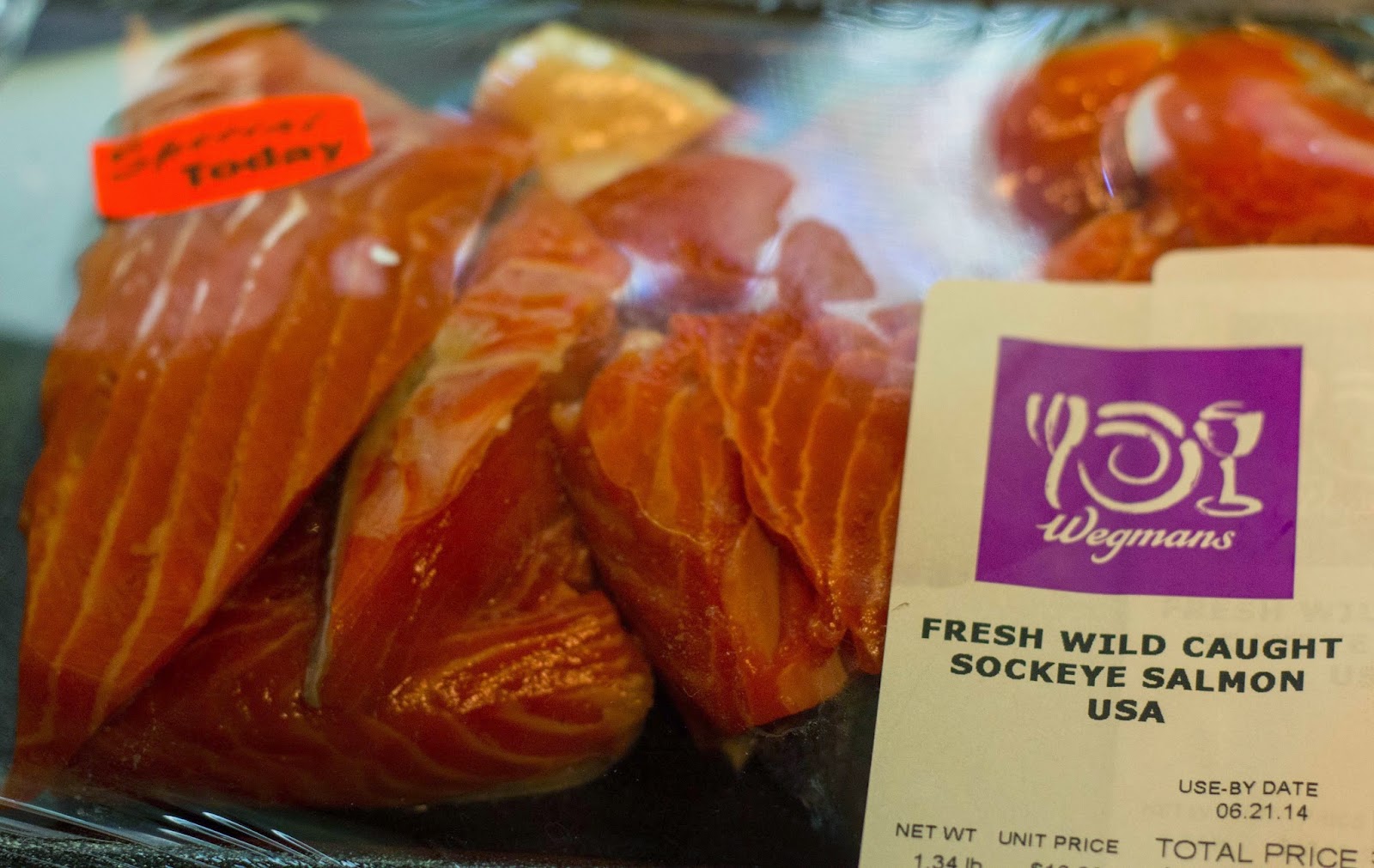 But now it seems that Wegman's has realized there is a demand for the trimmings and is no longer giving them away for free.  Poking around the smoked whitefish, I was surprised to see two packages, each containing a wild sockeye salmon tail and the neck (no head though).  While I appreciate the store looking to get some return on the trimmings, I was surprised to see they were still asking $16.99/lb, same as a center cut filet of wild salmon.  No one was biting, and they were marked down to $10/lb...which still seems pretty high for a lot of fins, neck bones, skin, and cartilage.  These were not big meaty cuts.

I could clearly see the top two packages were tail and collar, and assumed the third package in the back was the same.  But when I dug it out I found it was filled with rough cuts of salmon filets.  While trimming the whole fish into nice, square portions, they had collected up all the odd, angular bits and bagged them up.  Now this was a bargain at $10/lb!  I scooped them up. 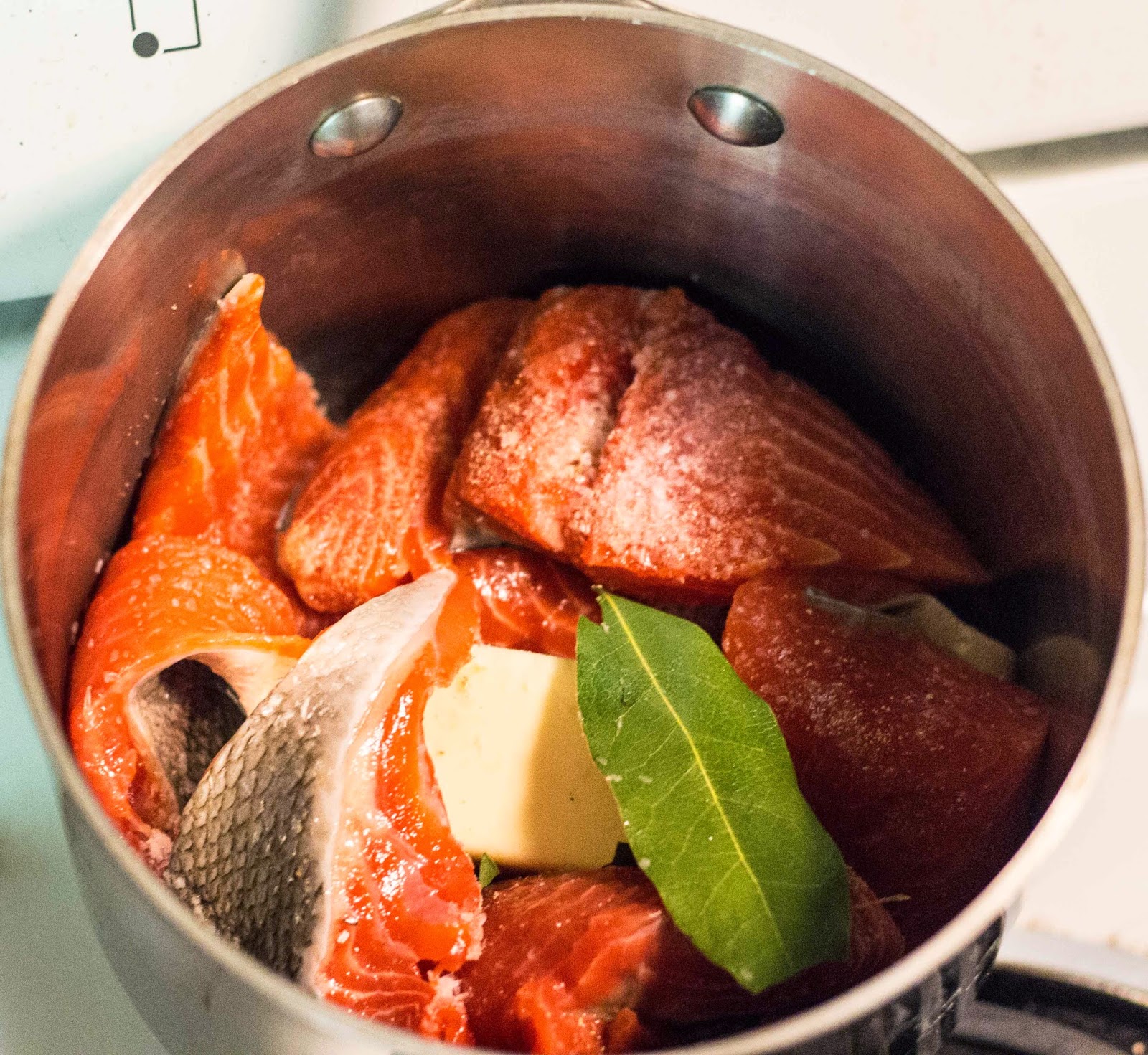 Down at the outer banks of North Carolina, I noticed some seafood restaurants that specialized in local fish would put these odd cubes and strips of fish to use as appetizers.  Breaded and fried, they came out a delicious little chunks of mahi mahi or tuna nuggets.  I considered this option, but ended up going for an old fashioned dish of potted salmon.

To "pot" something, as in potted meats, potted fish, or the classic Lancashire potted shrimps, just means to seal it up in a pot.  It's similar to rillettes or a confit, in that the meat is cooked down, then sealed with a layer of fat, but usually doesn't involve as long of a cooking process (and thus also does not last as long as rillettes or a confit).
So to start, I gave the wild salmon a good shake of salt, white pepper, and a touch of cayenne.  Then I put a stick of butter in the bottom of a pot with about 1/4 cup of water and bay leaf.  The salmon got packed around this and gently cooked for about 40 minutes over a low temperature.  Next I removed the meat, picked out the skin and bay leaf, and poured off all the juices.  This was packed into a bail top jar with a bit of the cooking juices to make a slightly thick, but spreadable salmon forcemeat.  I tried to keep a good amount of the flakes intact to add some variety to the texture, rather than just mashing it into a totally smooth paste.  Then I sealed the jar up with some of the (now pinkish) cooking butter and let it sit overnight in the fridge. 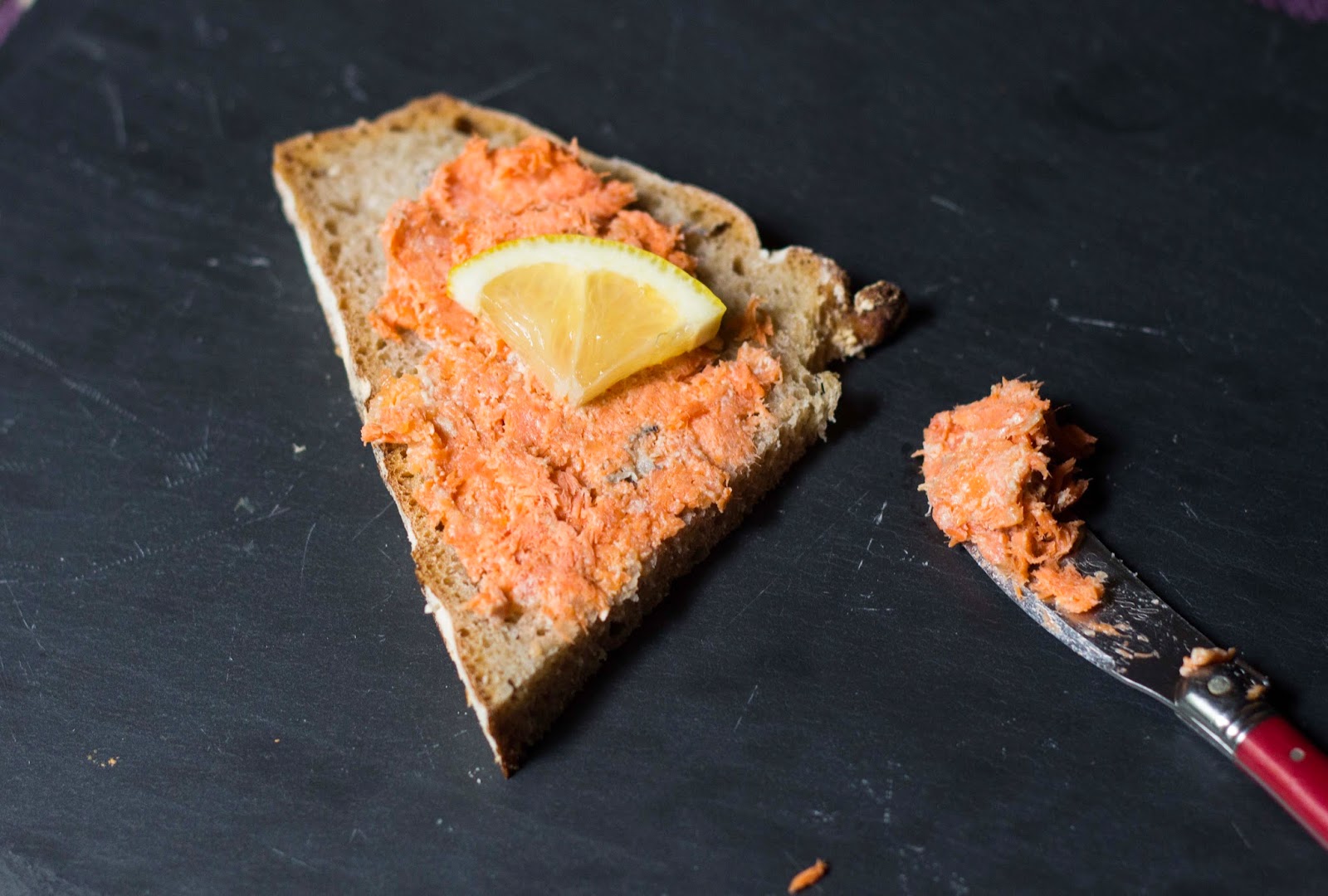 The next day I cracked off the seal of butter and scooped out the contents.  The salmon spread easily and didn't have any overly "fishy" flavor.  It's quite nice on its own, although I've been adding a bit of lemon or snipped chives to brighten up the cooked down flavor of the fish.  Another contrast to rillettes or confit is that this still tastes very light and summery, as I just added back enough fat to float on top and cover the salmon.
SHARE SHARE SHARE