Juniper berries became a pantry staple for me sometime in college.  It was in an issue of the sadly now-defunct Gourmet magazine that I first saw a potato gratin with juniper.  Like all potato gratins, it was immediately enticing, from the soft, crumbly slabs of cream-bathed potatoes to the broiled cheddar top that sat like a shingle of crisp, amber cheese.  What made this gratin stand out was the studding of what looked like black peppercorns, but were in fact juniper berries.  Described as resinous and reminiscent of rosemary, I was sold.  My college roommates were polite enough to tolerate the monthly presence of the juniper gratin on our table, despite a feeling that I think they were not thrilled with the piney, husky flavor permeating their potatoes. 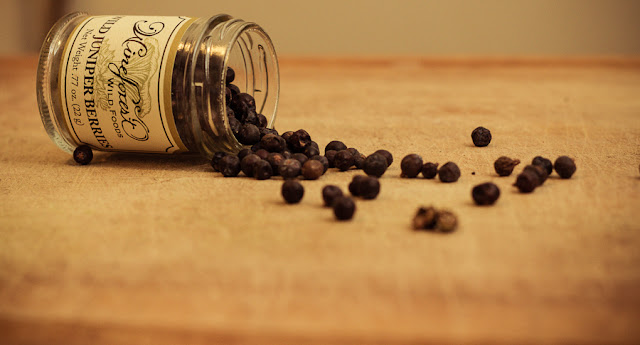 Since then, juniper berries have been a constant presence in my cupboard.  A necessity in most of my brines for ham, corned beef, and tongue, juniper also makes its presence known in curing pancetta or when I make a batch of sauerkraut or pickles.  I’ve added them to wine vinegar to give it a stronger flavor, and even looked at getting a barrel made of juniper for aging vinegar (but that was cost prohibitive).  In the fall, I kept my eye out for wild juniper, but gave that up when I read that several species were toxic. 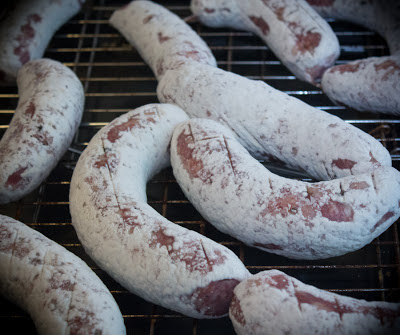 But the best match for me has always been juniper and pork.  So why not make a dry cured sausage with a strong juniper presence?  Juniper is used in some Northern Italian and Eastern European salami recipes, but always in miniscule amounts, overshadowed by garlic, red pepper, or clove.  So for this batch I made a basic salami mixture of pork butt and back fat, inoculated with T-SPX starter culture, and soaked the hog casings in a mixture of warm water, dextrose, and Penicillium nalgiovense mold cultures.  While crushed juniper berries were the star, I also added a bit of rosemary; gilding the resinous lily, I know.  And now they’re hanging to cure, and I’m very excited to see how they turn out in a few weeks.
SHARE SHARE SHARE