So back at the start of November I made my first batch of salami cured in a casing made of caul fat, the web-like membrane surrounding a pig's internal organs.  Inspired by Indianapolis' Smoking Goose, I found the idea of using caul fat as a casing really innovating.  Now, each of these salami's only weighs about 6-8 oz, but I think they look much longer to cure because of their ovoid shape.  Whereas a similar straight salami has a lot more surface area to dry, these salami's have a thick core that takes time to become sufficiently dry. 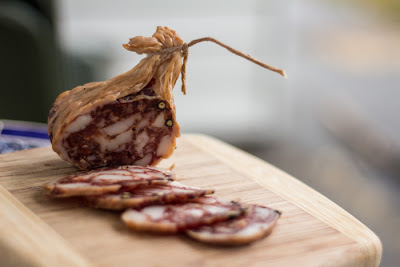 But I think the wait was more than worth it!  Gently smokey, with a rich, savory cured flavor, and a small hint of heat from the chilies.  As the old chestnut goes, your first bite is with your eyes, and I keep thinking these look like big pork figs.  So I'm thinking it would be fun to pair these with a dried fig mustard, or a spicy Italian fig mostarda. 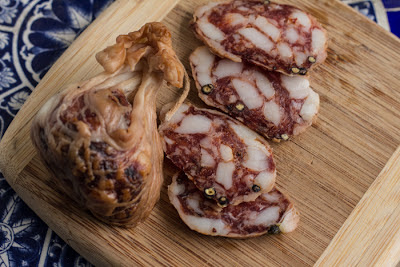 The one thing you're probably noticing is the large cubes of fat in this salami.  While I don't mind them, I think that's part of the hazards you have when you dice the fat by hand.  When I first started curing salami, the fat got overworked and smeared in the salami.  This was for three reasons:
- The fat was not cold enough
- The kitchen aid mixer does not have a grinder plate large enough to keep the fat in sufficiently large enough pieces.
- When the fat and meat get put in the casing, the auger of the kitchen aid stuffer rekneads them, further working the fat.

So this time I decided to dice by hand, leaving me with some slightly too big cubes of fat.  But it's like in target shooting - your first shot's too low, you correct and go too high, and then finally you sight in and hit your mark.
SHARE SHARE SHARE