Last year Carla and I made a special holiday beer for our families, Bonne Bouche’s Black Snout Stout.  Since then, we’ve been talking about this year’s beer and tying the brewing style to the label.  Bonne Bouche turns two years old today, and he was certain to be at the center of the beer…stylistically.  On the brew day he was kept safely away from the boiling wort.  For 2012, I wanted to stay with the same dark ale style, but move away from the Russian Imperial Stout style of 2011.  Thinking about holiday beer styles was a reoccurring theme when I was on the road for long drives.  I don’t care that much for holiday spiced beers, which are interesting to try, but I never really want a second glass.
Thinking of special occasion beers, I do love to treat myself to Gulden Drak, a dark Belgian abbey ale.  Rich, thick, and bold, this strong ale combines the force of its high alcohol content with the sweet and soft notes of Belgian abbey ales: notes of plum, currents, and a slightly winey finish.  So as I tweaked and adjusted my planned recipe, making some changes of adding rye to the grain bill to give a more robust, husky flavor to the beer, Carla worked on the below label, which came out awesome. 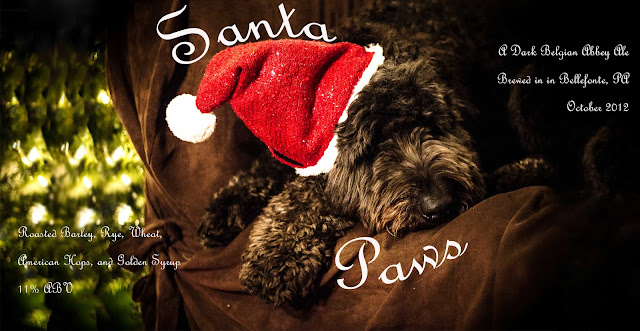 That’s our snoozing Bobou, unbeknownst to him with a Santa hat perched on his head.  I love the dark, shadowy  image, with the gentle light from our Christmas tree and the bright pop of the red hat.  It reminds me of a little kid falling asleep waiting for Santa.  In the glass, the beer is definitely strong, and I think could use a month or two to even out the alcohol’s sharpness with the sweetness of the malt.  All in all, I’m very pleased with the beer and I think it’ll be wonderful to try and compare in a year or two.
SHARE SHARE SHARE

One day, the "influentials" will spot your blog with its breadth of culinary subjects covered with zest & humor. Then it will be off-to-the-races for Culinary Pen.
TGD