In the distilling lore, the angels have their share of whiskey, which they slowly siphon away as the spirit ages over the years. In actuality, the porous nature of the wooden barrel allows the water from the spirit to slowly evaporate into the air, concentrating the liquor's strength. Or if you're an agnostic, you'd use a steel barrel to block the angels and take God out of the equation all together. 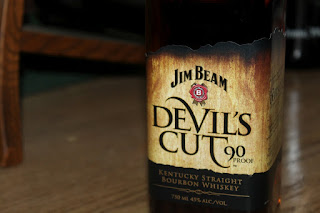 Anyway, part of the spirit is also absorbed into the wood of the barrels. Jim Beam has named that "the Devil's Cut," and has invented a proprietary method of getting that bourbon out of the wood and into the bottles. I imagine they use some kind of centrifuge to whip the liquid out of the wood, but who knows? My other guess is that they chip the barrels up and then press them in a clap, but that seems a bit Willy Wonka. But since by legal definition, Bourbon can only be aged in new charred oak barrels, I'm sure Jim Beam has plenty of spare barrels to experiment with.

This "reclaimed" bourbon is then mixed with 6 year old bourbon and aged again in oak barrels. While it might sound obvious that this bourbon smells like wood, I was actually surprised it didn't have a super vanilla aroma you can get from oak. Instead it has a deep, husky smell, that ends with a familiar sweet bourbon scent. The mouthfeel is very thin, with an oddly smooth flavor. Again there's not any vanilla notes, but also none of the caramel sweetness that I find usually sets bourbon apart. It does have a slight oatmeal taste, and a warm, heavy, oak-focused finish. What was most surprising to me was that the finish just went on and on, yet still came through very smooth.
At only a slightly higher price point that regular Jim Beam, I think the Devil's Cut is a very interesting and rewarding bourbon. I think the idea of reclaiming the spirit from the barrel's makes for a really great story, and probably will sell a great deal just on the concept alone. Although the bourbon is somewhat uneven-tasting, compared to a more well-rounded bourbon like Woodford Reserve, it's still very good.
SHARE SHARE SHARE

That idea of sucking the alcohol out of the barrels doesn't sound too good to me.... I'll stick with the Turkey! gobble gobble.

Somebody has been down the Bourbon trail in Kentucky. Check with Bourbon Steve.