Ale brewed with heather is an old, old recipe. Brewed since before the birth of Christ, there are still a few commercial breweries making leann fraoich. I came across this recipe a few years ago, but I think the odd Spring weather, and the following splurge of wild edibles, made me think it would be interesting to brew a beer using herbs, rather than strictly hops. Although full disclosure, we don't have any heather growing in our yard or the neighboring fields, so I purchased a pound of dried heather blossoms. I mostly have mint, dandelions, and purslane at my disposal, and I didn't think they would result in a particularly great beer. 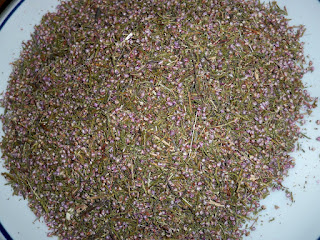 Historically, heather was used in place of hops, which was not available in Scotland. Even then, Scotland held on to their historical brewing recipes much longer than many other countries, especially since hops were views as a "British" influence that had no place in a Scotsman beer. This recipe uses a small amount of hops to provide a bit of bitterness, plus the antiseptic qualities of hops.

So now 5 gallons of my own leann fraoich are fermenting away in the corning. Being a low alcohol beer (~5.5%), it shouldn't take too long to ferment out, so I'm very excited to be able to relax with a pint and poke about the garden in the spring weather!
SHARE SHARE SHARE