I think I was first attracted to this product because of the odd , prawn-headed humanoid on the can eating two sardines. Next was the oddly-worded description of "seasoning for macaroni with sardines." A baffling ingredient list of wild fennel, sardines (min 25%), onions, sardine puree, and black currants was enough to convince me to buy a can. 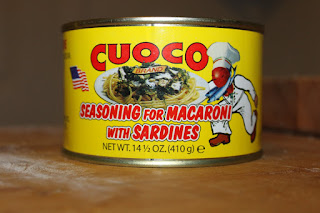 In researching a bit, I found out this is one of the oldest dishes of Sardinia. I can't find the source again, but one wonderful description was, "by the time the new world's tomato came to Italy, the cuisine of Sardinia was already centuries old." It went on to explain that this was an traditional combination of ingredients native to the island. Opening the tin I found what looked liked a watery pesto. A quick stir turned up several whole sardines and, yes, the black currants. 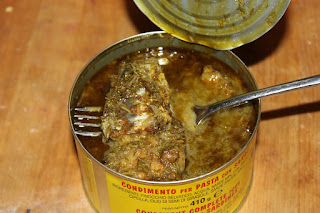 The "pesto" was from the pureed wild fennel, which is more frondy and less of the white bulb you find in cultivated fennel. I found the slightly fibrous ground fennel to be oddly reminiscent of the tiny, edible bones of the pureed sardines, which is actually more pleasant than it sounds in print. Tossed with spaghetti, I thought this was a very nice sauce, but still a canned version of what should be a homemade sauce served by a grandmother. The fennel was present, but muted. The sardines were pleasant and meaty, but not rich and oily. The black currants were soft and unremarkable. 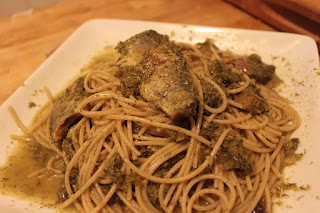 I really think this would be an exceptional dish if made fresh. Lots of aromatic, anise-scented fennel, large slices of fresh, firm sardines, the occasional interruption of a sweet and chewy currant. I'll have to keep my eye out for fresh sardines to give it a shot. Bonne Bouche, however, might argue the sauce was perfect. As soon as I opened the can, I couldn't shake his little snoot poking and investigating around the kitchen. 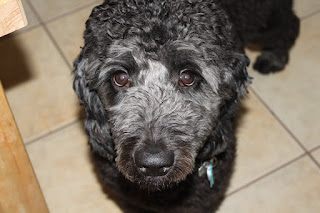