This odd sounding pie was originally described to me by Carla's Mom, who had it years ago at a party and was surprised it was a sweet, not savory pie. I found two recipes for it in the New York Times Heritage Cook Book. Why two, I don't know, as they don't differ in the slightest, except that one is ascribed to Oklahoma and one two Idaho. Plus Oklahoma is firm that you need exactly 8 green tomatoes, while freewheeling Idaho plays fast and loose with "6-8 medium sized green tomatoes." I decided to go with Idaho's recipe. 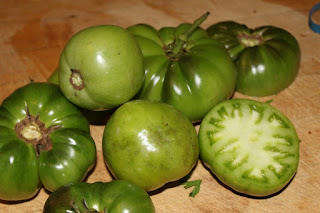 Both recipes (along with a few I found online) instructed chopping the tomatoes into wedges, a la apple pie american. Then add the zest and juice of one lemon, one tsp cinnamon, and 3/4 cup of sugar. Simmer these for a few minutes to soften the tomatoes and get the juices running, then stir in some corn starch as thickener and allow to cool. Plop into your favorite pie crust, seal, and bake. I said a silent prayer as I spooned out what looked like chunky tomatillo salsa into my pie crust. 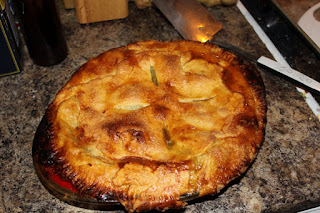 After baking at 425 for 40 minutes, the pie came out, bubbling like any other proper dessert. A few hours later, once it had cooled, Carla and I took our first trepidatious taste. It was sweet! And oddly fruity. To be honest, it had that fleeting, slightly exotic taste you'd find in star fruit or milk apples. But it tasted like dessert. It didn't taste like apples, as some online commentators assured me, but it was a certainly fitting dessert pie. It even tasted good cold the next day. I'm not sure if I'll rush out to bake another, but a few recipes suggested including golden raisins to the filling, which might be a nice change of pace when I'm faced with another glut of green tomatoes. 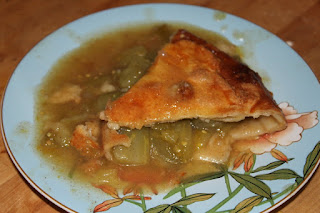 Hi Nick and Carla,
We enjoyed the Oktoberfest with you tonight. Music was a bit loud but the company was fun.
I received the NYT Heritage Cookbook as a wedding gift and enjoy reading it as I might a novel. You cook it and I'll eat it, but most of the recipes are too involved for me.
We have plenty of green tomatoes if you need any.

Thanks so much for the comment! It was great to meet you both as well, we had a great time.

My NYT Heritage Cookbook was actually passed to me by my mom, as she just loved it for both the classic recipes and the strange, oddly quirky regional dishes, like the green tomato pie.