A Southern Chicken in French Clothing

In a rare feat of marketing, the packaging on a chicken was so confusing to me that I decided it was worth $14. Next to the organic chickens was an odd little sack of meat with a regal-looking label affixed to the front of its vacuum seal. The label's gold script said Poulet Rouge Fermier au Piedmont. From my time in the cheese world, I know "fermier" means made on a farm, but why is the French language advertising something from the Italian Piedmonte? And since when can we get raw poultry from France or Italy in the U.S.? 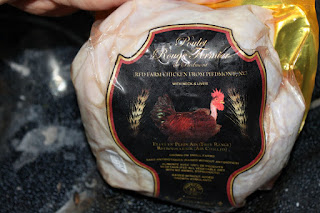 Then I saw in tiny script down below that this Poulet Rouge is from North Carolina. The Piedmont region of North Carolina to be exact. So why is this English-as-a-Second-Language bird all decked out in French words when it's from the American South? And why is it "nearly boneless"? Why is a whole chicken sitting in Pennsylvania, advertising itself to me in French, missing all it bones probably back somewhere in the Tarheel state? I needed answers. So in the immortal words of the late, great Hunter S. Thompson, I bought the ticket and took the ride.

I plopped the boneless meat sack on the counter and decided to go the simple route. A $14 chicken should stand on its own as an entree, so I simply salted it and got ready to pan fry it. Looking at the little, frameless chicken, I couldn't help but think it looked like a naked chicken suit that my wife would probably buy to dress up our dog in for Halloween. 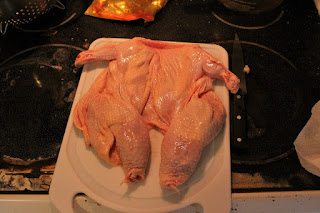 Reading online about the manufacturer, Joyce Foods, I learned this was a French breed of chicken, which sort of explained why the label was entirely in French. The most interesting nugget was that this breed has a very thin skin, so they need to be butchered by hand, rather than by machine. Yeah, there are chicken butchering machines. Take it from a guy who once priced out a tripe-scalding tank from a company in China. So Joyce Foods found a group of elderly poultry men who used to work in manual chicken butchering shops in the 1950's and 60's who could train younger men how to process these new, fancy chickens. Talk about saving a dying skill, that's really impressive. 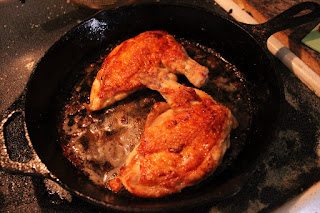 And once it was in the pan, the chicken was impressive as well. It cooked up beautifully, with crisp, succulent skin. Flavor-wise, it was ok. And I don't like saying that. I love that they found a rare breed of chicken, took the effort to let it grow to its natural slaughter weight (living outside and on a vegetarian feed), and even trained men on the traditional, natural way to clean chickens. But to be honest, it tasted good, but no better than a regular organic chicken. It didn't have the rich golden fat of the chickens I've killed myself, or the flavor. Plus, it was tough, which was weird. If I killed and cleaned a chicken, it would have tough meat if I cooked it the same day. But after the rigor mortis passed in a day, it was very tender. And my birds were big birds, much bigger than the Joyce bird.

So I'm not sure what to say. It tasted good, but at the price I would just save some money and buy an organic or Kosher bird. Or, if I had my druthers, I would just get a bird from a local farm. But I do hope we continue to see more progressive products like this in large markets.
SHARE SHARE SHARE